“Utamaro and His Five Woman opens to a languid tracking shot of a formal procession of men and women performing a near static, ceremonial dance. The setting is the Tokugawa Era of late eighteenth century Japan, and the impassive courtship is a reflection of the rigid class structure and behavioral code instilled during their feudal rule. A young apprentice artist from the official Kano Art School named Seinosuke (Kotaro Bando) decides to amuse his mentor by purchasing some inexpensive wood block print artwork of Edo’s famous courtesans at a nearby market square, and is insulted to find the artist, Utamaro’s (Minosuke Bando) scathing indictment of the prestigious art school, commenting that the school’s pervasive trait of using unnatural colors depict their women as freaks. Seinosuke sets off to find Utamaro against the wishes of his fiancée, Kano’s daughter, Yukie (Eiko Ohara). A robust, former courtesan named Oshin (Kiniko Shiratao) decides to warn Utamaro, comically rationalizing that he has not yet had the time to paint one of his flattering portraits of her. However, upon hearing that a courtesan renowned for her flawless skin, Takasode (Toshiko Iizuka), is about to be tattooed by a local artist, Utamaro leaves home in order to study her form, and Seinosuke encounters him at the pleasure quarters. Agreeing on a painting challenge instead, Seinosuke quickly finds himself outmatched by the talented Utamaro when the master decides to improve on the novice’s work. Later in the evening, Utamaro comes to the aid of the tattoo artist when he is unable to create a portrait worthy of Takasode’s beauty. After witnessing Utamaro’s great skill, a humbled Seinosuke decides to abandon his privileged life and Yukie in order to study under Utamaro. But soon, Utamaro’s house is thrown into crisis when his model, Okita (Kinuyo Tanaka) learns that her lover has eloped with Takasode, and the embittered Okita decides to retaliate by seducing the impressionable Seinosuke. Left without inspiration and constantly quarreling with the tenacious Okita, his friends take him to watch a feudal lord’s bizarre daily ritual of sending a chorus of young women to swim in the ocean to retrieve an object. Utamaro becomes captivated by the winner, Oran (Hiroko Kawasaki), and asks her to become his new model.”1 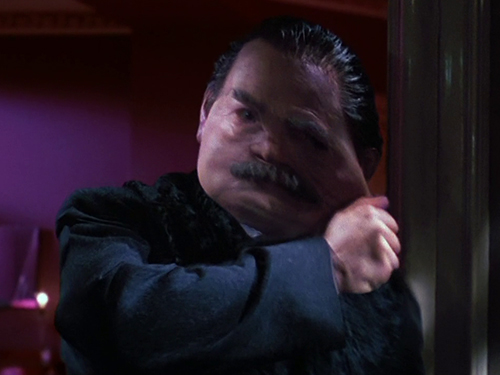