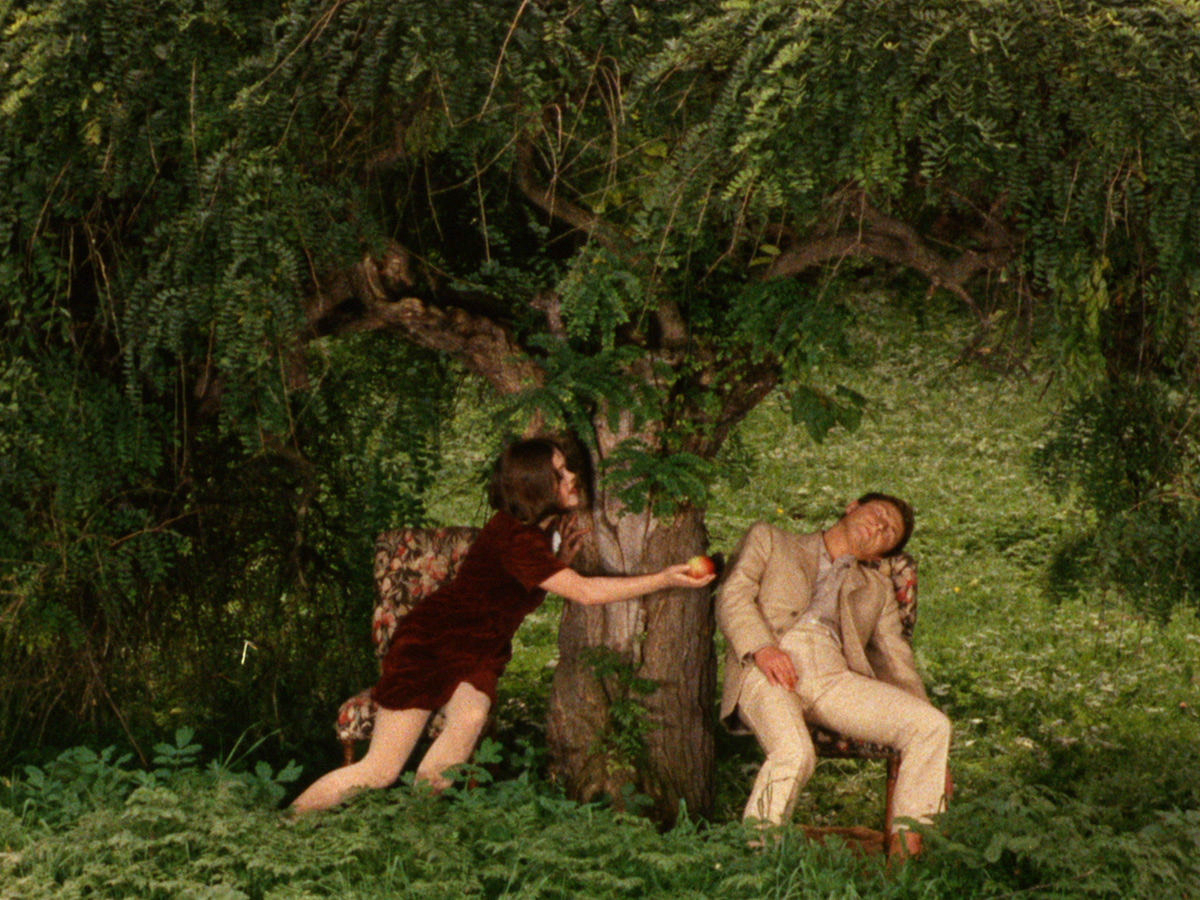 An experimental retelling of the story of Adam and Eve which then progresses into an allegorical depiction of loss of innocence.

“Through distortion, collage, convulsive chance, repetition, and slowness, the film build a radical aura in the Brakhagean sense, delivering an emotional and political intensity via formal rather than narrative elements. In the twenty-first century, Chytilová’s body of work occupies a prominent position in an international female avant-garde, forming dialogues across regional and political boundaries past and future.”

“Chytilová famously refused to be labelled a feminist, and certainly to view her work only through a feminist lens would be to disregard a rich and nuanced world. That said, her portrayal of female characters remains exemplary and fascinating, and her representation of female sexuality and women’s negotiation with male sexuality and sex in general acquires particular interest when considered across her entire oeuvre.”

“Bureaucrats and politicians who monitored the Czech cinema were not pleased with the film (Daisies, red.), perhaps because of its complexities and avant-garde style. Officially, one deputy from the National Assembly complained that the imagery of the film revealed a wastage of food, referring to the scenes in which the main characters destroy a banquet setting. The film was officially condemned and banned until 1967. As soon as it was released, it won the Grand Prix at the film festival in Bergamo, Italy. This would become the pattern of Chytilova's career—while gaining recognition for her work on an international level, she was condemned in her own country. No further state funds were made available to the gutsy filmmaker to make her next film, The Fruit of Paradise (1969), which was coproduced by a Belgian company called Elisabeth Films. A highly stylized and unconventional narrative, The Fruit of Paradise is based on the story of Adam and Eve. Again difficult to penetrate with easy explanations, the film makes heavy use of improvisational acting, an allegorical narrative, and obvious visual techniques.”3

“The critical tone of Eden’s biblical unfolding (accompanied by the repeated chorus of ‘Tell me the truth’) has a precedent in Chytilová’s 1961 film Pytel blech [A Bagful of Fleas], in which a female hostel filled with factory girls serves as a cinéma vérité Socialist Eden where adolescence butts against temptation. At one point a girl is upset at the thought that ‘God is just a mist’, and the narrative ponders whether truth is to be found in religious beliefs held for centuries and passed down through the family, or in the teachings of the schools. In the book of Genesis Eve is punished by God to endure a terrible labour when she gives birth. The reality of a painful childbirth cleverly corresponds to Chytilová’s own pregnant state during the filming of The Fruit of Paradise. Lastly, and most importantly, Chytilová has said categorically that the Soviet invasion of 1968 ‘is in’ this film. In interview she recalls how even her breast milk was infused by the sounds of the bombings. The allegory of the apple and the serpent was necessary to show how the Czech people recognised: ‘That we live in a lie. That we are violently raped.’ adding: ‘That was the main reason for the movie.’”

“Before all else, Chytilová claims to have devised Fruit of Paradise as a direct response to a key moment of political struggle in her country. But the film nevertheless also endures as a narrative of female emancipation, an active rejection of the myth of original sin, a depiction of the failure of the perceptive regime of men and a pessimistic, pseudo-autobiographical statement on the prohibition of female agency and enjoyment. Beyond this, it represents perhaps the height of experimentation in the Czechoslovak New Wave; and, as such, offers itself as a work that promises to open the eyes of its viewers to new ways of seeing under difficult circumstances.”

“The cinematographer, Jaroslav Kučera, who was once described by the director Martin Frič as ‘the most extraordinary camerman this country has ever had'. (...) Kučera’s powerful use of the image reveals itself in the work of other directors but it is most notable in his work for Jasný and Věra Chytilová – Daisies and The Fruit of Paradise (Ovoce stromu rajských jíme, 1969) – to whom Kučera was married.”

“One of the most striking elements of the film is its remarkable use of color, which serves to exult the exquisite set design by Ester Krumbachová and evocative cinematography of Jaroslav Kučera. In particular, the costumes play largely on the dichotomy of white (or off-white, significantly) and red. These two colors have various symbolic meanings attached to them, such as innocence and temptation, blandness and passion, purity and danger, and simply male and female, as in the Mărțișor/Martenitsa traditions from further East, leaving aside possible political interpretations in the tradition of Jancsó.“

“These shifting dynamics are executed with the flat, naïf acting style adopted by the Studio Ypsilon theatre troupe, which involves characters in deceptively ‘regressive’ actions: Eva crawls around the floor in Robert’s quarters looking for clues, and bangs convulsively on a set of drums; the denizens of the health resort play excitedly on the sand dunes with an orange balloon; Robert makes exaggerated, villainous gestures, and his fights with Josef are emptied of any serious tension. Such performances also divert our attention from traditional concerns with plot and character: just as Eva becomes more deeply involved with Robert and the drama escalates, the film shows more interest in the textures of fabric, water, soil and plants, and demonstrably revels in the affordances of Eastmancolor, with vivid symbolic reds thrown into sharp relief against the beige surrounds.“ 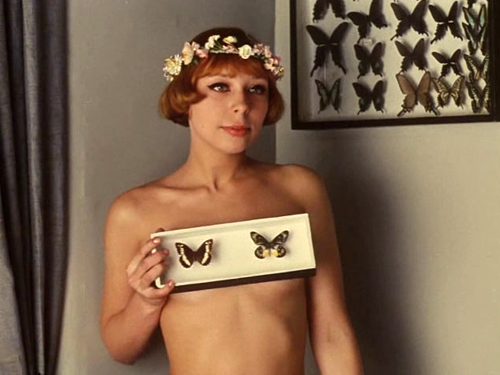 Daisies is a 1966 Czechoslovak comedy-drama film by Věra Chytilová. Generally regarded as a milestone of the Nová Vlna movement, it follows two teenage girls both named Marie, who engage in strange pranks.