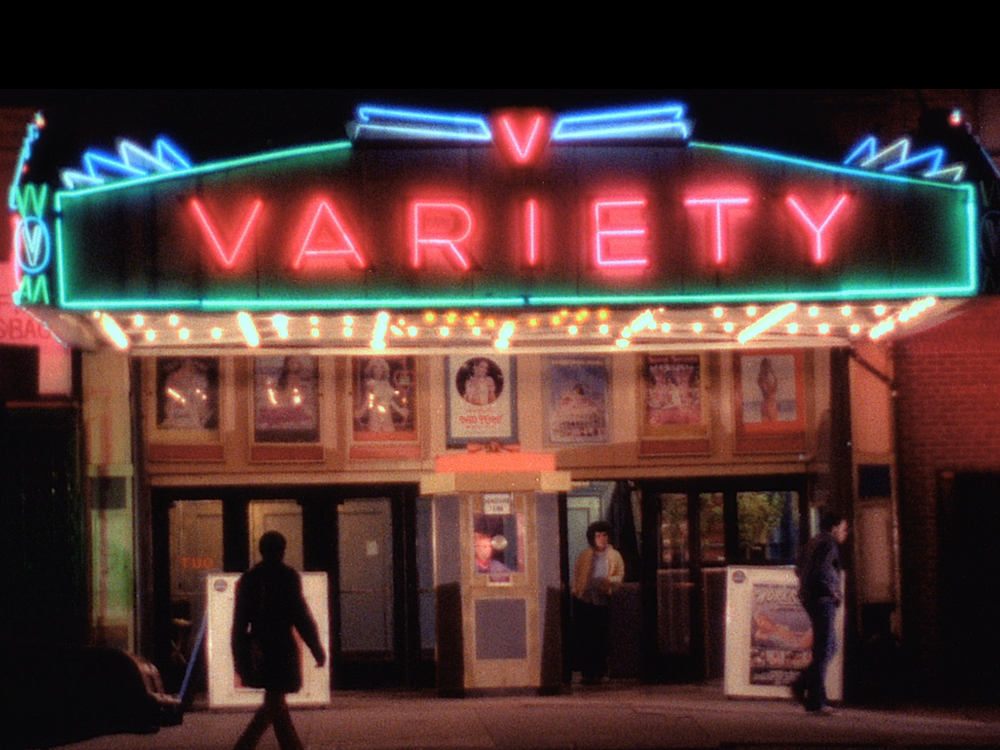 As a visual artist and filmmaker who moved from Boston to New York City in the eighties, I was attracted to the underside of the city I’d seen in movies like Sam Fuller’s Pickup on South Street (1953) and Jules Dassin’s The Naked City (1948). Exploring New York City’s underground in the early eighties, late at night, I came upon the Variety theatre. Its neon marquee looked like something from the past, and I couldn’t stop looking. I wanted to investigate the theatre.

Hitchcock films, including Vertigo (1958), Rear Window (1954), and Psycho (1960), attracted me because they possessed an obsessional quality – and when it came to making my film, I decided to turn the genre of the noir thriller on its head, presenting a woman as the investigator and a man as the enigmatic figure. Variety is a film about looking. I used frames within frames, windows, doorways and reflections in order to visually capture the idea of looking and being looked at.

In Vertigo, Jimmy Steward tries to make over Kim Novak into the image of the woman Kim Novak was playing – the wife. He re-makes her hair, her clothes, her makeup. Variety plays with reversing this systematic situation. My character is not being made over by a man: she remakes herself.

I remember a Hollywood thriller where this dynamic of looking is part of the story. The woman in Phantom Lady (Robert Siodmak, 1944) breaks a taboo by following a man into a club. She stares at him for such a long time that he is totally unnerved by her look and proceeds to drop a bottle, and when she follows him into the night, he is even more nervous. In a blind attempt to escape her look, he runs outside, but he steps in front of a car and is accidentally killed. Men are not used to being the object of the look.”

“[Variety] was about the framing, the color, and the light – a story about cinema in a way because it’s about the pleasure in looking. (...) That film has been compared to The Killing of a Chinese Bookie (John Cassavetes, 1976) or Taxi Driver (Martin Scorsese, 1976), and there’s no other way to get that certain grittiness but on film. It needed that grittiness to tell the story.”

“In the late 1970s and early 1980s, New York-based filmmaker Bette Gordon produced a series of works that chart a major shift in experimental practice from the rigor of structural film to a theoretically-informed interest in fragmented narrative and subjective experience that Noel Carroll would dub ‘the New Talkies.’ With her best-known work, 1983’s Variety, Gordon moves fully into the idiom of independent narrative cinema, but her concerns remain consistent: questions of sexuality, labour, and gentrification are pursued within a critical interrogation of filmic language. Hers is a cinema at once politically urgent, formally sophisticated, and emotionally compelling.

Variety reminds us not only of this lost New York, but equally of a pre-Miramax age when American independent cinema was truly independent and in direct dialogue with experimental practices across media.”