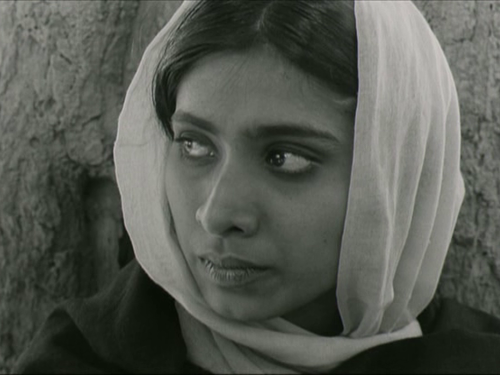 “In Mani Kaul’s first film, Uski Roti, every single image has been reduced to its minimal, single unity of meaning: a look, a movement of the hand, a curve of the neck, etc.”

“The discipline in these films [A Day’s Bread and One Day Before the Rainy Season] emerged mainly from cinematic means. In taking up certain limited aspects of cinema and bringing them in relation to the theme, all other factors (like acting, décor, mise-en-scene) were neutralized to realize the possibilities of the limited experiment. To demonstrate: confining the film to two lenses (28 mm and 135 mm) and making them represent the actual and mental life of the waiting wife in the beginning of A Day’s Bread - I mean, the wide angle provided the universal focus or the extra actuality of the cinematographic image, and the long focus a critical range of sharpness or a certain dream quality. Having faithfully established this as a norm, the lenses were gradually freed of the strict representation – they were crossing each other in the middle of the film where the distinctions were blurred – until in the end the represenation was reversed, with the result that the actual return of the husband almost appears as a hallucination.

The important thing [in Uski Roti] was to discover a group of distances and repeat them under a different improvisation at various points in the film. ‘Distance’ of course has its history in cinema. When Griffith used the close-up most effectively for the first time, he changed the distance and created the use of another volume; all earlier works were confined to medium or long shots. The unconscious growth of the tradition of long-shot, mid-shot and close-up is of utmost significance for the cinema. Every filmmaker must necessarily attach emotional/intellectual significance to these vague divisions in order to shoot a film... Distances make links.”

“A tree, for example, will stand for itself in front of a camera and nothing more, unless the filmmaker decides to invest and idea into the tree. Investing an idea into the tree (whether it makes the tree beautiful or ugly) is above all a way of ‘de-naturing’ the tree... The very tree that stands for itself will begin to reveal its own meaning when it finds a suitable position in a given set of (standing-for-themselves) images.”

“I believe the camera is not something you’re seeing through; it’s the way your body extends into life. This is what I teach my students (I should tell you that they make very different films than I make; I never encourage them to make my kind of films). I want them to understand that when I move, I move differently; and when I sit, I sit differently. You have to learn to hold the camera with your rhythm, and not just have an idea in your head and try to illustrate that idea. You have to understand this, even when a cameraman is physically shooting the film. We all create differently, precisely because everyone’s body extends differently. Your movements are like a dance.

I sincerely believe now that I can make a film without looking through the camera. Looking through the camera obviously was important to me when I made A Day’s Bread, because at that time I thought about organizing space. Since the European Renaissance, we have been trained to understand that organizing space, and especially a sacred space – a church or a temple – is what creates a sense of attention and therefore time. But now I believe that I should in fact place myself in time, and into a certain quality of attention, and let the space become whatever it becomes. It doesn’t interest me anymore to compose my shots, to frame them in any way. I wish to place myself in a particular sense of time and let space ;be, or grow. Nothing can go wrong – I know that – nothing can go wrong.

With A Day’s Bread, it was strange. I had a dream. In the dream, I saw a filmstrip lying on the floor, and on it I saw all the shots. So I had a very strong sense of what I was going to do. But even at that time, locations were very important to me, as important as the actors. When I go to a certain place, immediately the location itself automatically suggests certain images and movements. At that time, I used to think, then go to a location. But now I don’t want to think, ‘Now this is the scene; therefore she should be in the foreground and somebody should be in the background.’ Actually I’ve never done that kind of thing, not even in A Day’s Bread.

It is true that the camera is a product of the European principle of perspective, of convergence – which is basically an optical illusion, because in reality parallel lines don’t converge: you can shut your eyes and walk and you won’t come to a convergence point. During the Renaissance, the idea of convergence produced great work. The same is true of Western symphonic music, which is very beautiful (and in a sense, convergent), and of narrative film, which creates climactic ‘convergences.’ Earlier chronicles and epics didn't have the convergences that modern narratives do. And it is perfectly legitimate if young filmmakers would rather explore non-narrative ideas. In fact, it’s a tragedy that we don’t yet have an instrument that can deal with the non-narrative forms we have in our hearts.

When I made A Day’s Bread, I wanted to completely destroy any semblance of a realistic development, so that I could construct the film almost in the manner of a painter. In fact, I’ve been a painter and a musician. You could make a painting where the brush stroke is completely subservient to the figure, which is what the narrative is, in a film. But you can also make a painting stroke by stroke so that both the figure and the strokes are equal. I constructed A Day’s Bread shot by shot, in this second way, so that the ‘figure’ of the narrative is almost not taking shape in realistic terms. All the cuts are delayed, though there is a preempting of the generally even rhythm sometimes, when the film is a projection of the woman’s fantasies.”

Mani Kaul at the 1994 Flaherty Seminar in New York4