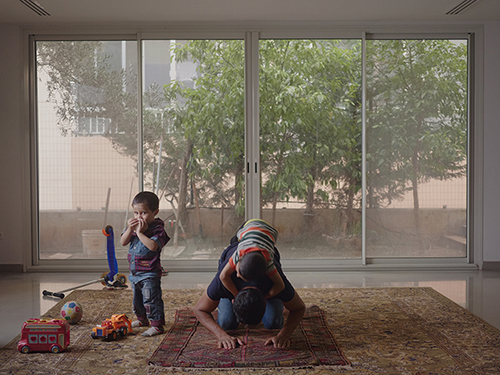 The Script is born out of the artist’s research into online content connected with the Arab world. Exploring YouTube using relatively neutral search terms such as ‘father and son’, Zaatari discovered multiple videos depicting fathers praying. Despite being produced by different men from different regions in the Middle East, Zaatari observed telling similarities in content which depicted men fulfilling the duty of salah – the ritual of five daily prayers undertaken by practicing Muslims – within a domestic setting. As breaking off from prayer is often frowned upon, the fathers continue praying despite their children’s mischievous attempts to distract them. In The Script, Zaatari presents a filmed re-enactment of these touching moments, paying homage to dual commitment to faith and fatherhood.1