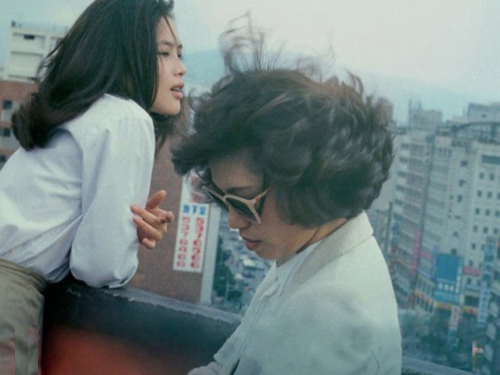 You’ve dedicated a movie to Taiwan’s largest city – what were your intentions in making Taipei Story?

Edward Yang: In my first feature film, That Day on the Beach (1983), I wove together a lot of things that had happened to me or my friends, making a kind of narrative structure out of our experience. The movie was very successful, but people often said that’s because you have the support of all these stars in it. So in my second film, I wanted to break through my own limitations. One way of doing that was to have no stars, so I decided to use only amateurs. Another was to create a story out of nothing – something that was not based on my own experience, or that of anyone else I knew. So my starting point was essentially conceptual. I wanted to tell a story about Taipei. There’s a personal element to that. A lot of people have tried to brand me as a mainlander, a foreigner who’s somehow against Taiwan. But I consider myself a Taipei guy – I’m not against Taiwan, I’m for Taipei. I wanted to include every element of the city, so I really gave myself a hard time, to build a story from the ground up. The two main characters represent the past and the future of Taipei and the story is about the transition from one to the other. I tried to bring enough controversial questions onto the screen, so viewers would ask themselves about their own lives when they’d seen the film. On the surface, Taipei Story offers a kind of poetic or even melodramatic façade. But, actually, every element of the way we lived then was in the film.

How was it received?

Yang: The box office was pretty bad. The key thing was that there were no stars. But also a lot of people didn’t understand the intention of the film. They wanted to see another Day on the Beach, a love story with all these romantic entanglements. So they were put out when they looked at this movie. “What? You call this a love story – people breaking up?” But that’s how I looked at the city at the time – we were breaking away from the past, and our ties to the past are inevitably romantic ones. But realities set in, economic pressures, other kinds of hardship, and then difficult demands build up on the woman character. She is bound to think of some different things, and then if you don’t understand this, of course the story will fall apart. But there weren’t that many sophisticated critics at the time, and they tended just to discount the film as a commercial failure. But looking back, what Taipei Story actually shows is my devotion to the place – how tied I feel to its past, but also how much I care about its future.

“A key early work of the so-called Taiwanese New Wave and one of the towering achievements of its decade, Taipei Story’s appearance in this excellent transfer continues the process of redressing the criminal unavailability that plagued Yang’s filmography for a number of years. (...) Yang’s largely nocturnal film speaks to a nigh-universal experience of thirtysomething readjustment and rue, as well as to the very specific texture of life in Taiwan, a country closely tied to America by economy and popular culture, towards the end of the long Kuomintang-imposed period of martial law.”

“It cannot be said that Taipei is a modern, Western-style city in the same way that one could affirm this of Shanghai, for example. Rather it is an example of some generally late capitalist urbanization (which one hesitates, except to make the point, to call postmodern) of a now-classic proliferation of the urban fabric that one finds in the First and Third Worlds everywhere alike.”

“Taipei Story, in my view, was his first masterpiece and one of the great films of the Eighties. The film saw the future of urban life with absolute clarity.”