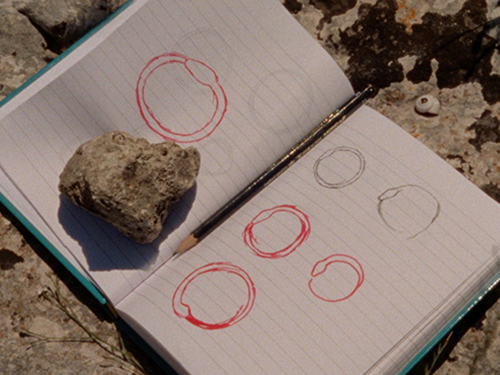 “Early on, I decided that the premise and structure for the film would be the Ouroboros: the symbol of the snake eating its tail, a perpetual cycle of destruction and renewal, in order to ask the open ended question of whether forgetting was the way forward or the way that we destroy ourselves. I had a lot of ideas for where the other sights would be that I would mirror Gaza through. I thought about Athens, and Rome. I thought about cities in South America that had suffered conquests and colonization. And I knew that I wanted some kind of symbolic story to take us through the various sites, a person we could travel through, and the semblance of a narrative that would string these various sites together. I wrote a very loose script based on this, knowing that the people and sites I would eventually land on would help to shape the films narrative. And the narrative for me was something I had experimented with a bit in earlier work, the idea of love as mirroring the idea of hope. The fact that the only way to move on from heartbreak and fall in love again, is to forget the previous love. To erase it and face the possibility of having one’s heart broken again. So I wrote a script based loosely on the idea that its main character traveled through various sights in an attempt to erase the pain of heartbreak, only to end up back at the possibility for love again. The final film has little of this narrative in it, but I think it works as some kind of hidden force within the film that allows us to follow, without question, the forward momentum of the character’s trajectory and engagement through the various landscapes.

This is my first feature film and it felt like I had stepped into a whole other field when developing the idea and planning for the shoots. The most important aspect of deciding to make a longer film had to do with my wanting time to play a role in creating a story in which each new site would erase the one that came before it, and so the longer form (the feature length) was the way to do this. It had less to do with narrative and more with challenging myself to produce a work that sustained engagement with the ideas and images I wanted to make and for a visceral experience of forgetting through images.”