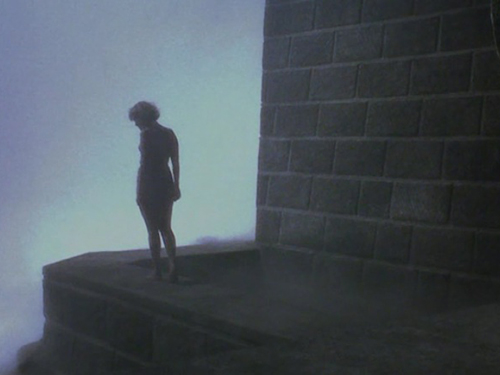 “When Germans become afraid, when that mysterious German fear begins to creep into their bones, they always arouse a special horror and pity. Their appearance is miserable, their cruelty sad, their courage silent and hopeless.”

“In a moving and telling interview conducted on Russian television in the summer of 2012, Alexander Sokurov revealed what the key to being human was in his view: to fear no more. He disambiguated the statement: it had nothing to do with being fearless in a sense of temerity or daringness, but rather to have overcome fear, such a natural, but perhaps animal rather than properly human emotion.

Sokurov’s comment serves the purpose of the discussion of Moloch, his 1999 feature about a day in the life of Eva Braun and Adolf Hitler, circa 1942, which marked the return to the foreground of screenwriter Yuri Arabov. (...) On the metaphorical level, where Mournful insensitivity evoked an apocalyptic Noah’s Ark, Moloch serves as a dark parody of the book of Genesis, specically the story of Adam and Eve. But unlike the innocence – soon to be smothered by the original sin – of the biblical characters, here Eva is a languid temptress awaiting physical love, while Hitler is a demented buffoon, midway between delusional delirium and a fear of the imminent fall. It is a paranoid, scrutinised, fear-ridden Nazi Eden that Sokurov gives us to behold.

Echoes to the book of Genesis are inescapable: Joseph Goebbels makes a jocular reference to it during the meal scene, and the names of the main characters coincide almost exactly with the first humans of the Good Book. But just as the Nazi enterprise aimed, among other things, at destroying or inverting the morals and values of the Christian West – appearing close, in its project of ritualistic neo-paganism and celebration of destruction, to Satanist practices of the Middle Ages founded on the grotesque inversion of Christian rituals – so does the film rely on a constant grotesque subversion and ridiculing of traditional Nazi iconography. The interesting aspect, of course, is that Arabov and Sokurov achieve this while constantly catering to the most precise historic details: costumes, props, and locations are all from the period or recreated with painstaking detail, and most of the dialogue comes directly from Erick Picker’s shorthanded stenograph records of the Nazi dignitaries’ ranting. To this, touches of slapstick are added, making this account of a day in Berchtesgaden’s ‘Eagle’s Nest’ almost look like an episode from the Marx Brothers (Leonid Mozgovoy’s Hitler, indeed, resembles Groucho as much as he does the German dictator). Likewise, when the Führer chases Eva Braun in his underwear in a strange seduction game, grunting like an animal, we de definitely feel as though we have relapsed into the madhouse of Mournful Insensitivity. Still, for all these trappings, Moloch is by no means comedy.

The term of the grotesque is important here: Hitler is aligned with Moloch, the Ammonite god described in the Old Testament, who demanded child sacrifice from apostate Canaanite followers – in short, a mythological creature with deep connections to Israel’s past. As Giorgio Agamben wrote in L’Ouvert, de l’homme et de l’animal (2002), what distinguishes human and animal is their approach to the world. Borrowing on Agamben’s theories, Yannick Lemarié argues that Hitler’s character is akin to a tick, for whom the world exists only in terms of need and body temperature; or a moth, attracted to and destroyed by the flame which will forever remain inscrutable to the insect. Hitler is thus condemned to an experience of opacity – he will never understand the world, nor can he properly enter a human world.

Sokurov, however, claims to be interested in showing the dictator as a human being: ‘By looking at Hitler, I want to see that man, what he has in common with us.’ The answer lies in the character’s fear, what makes him human in the biological sense, yet at the same time precludes his ability to become human from a spiritual perspective. For Sokurov, not all people are born with a soul – even though some, rarely, can acquire and develop one. In spite of the attractions concocted to amuse him, in spite of Eva’s seductive games, Hitler knows that something is amiss. He does not know this consciously – as a matter of fact, he has lapsed so deeply into his denial that he seems ignorant of the existence of the death camps. But he fears something nonetheless, and this fear, in turn, is the cause for his angst-ridden grimaces, his bouts of powerless fury, his regressive banter, pranks and demented remarks. On the one hand, instinctual fear is what is most sound about the Führer. And on the other, it reduces him to an animal state, while also making him appear like a grotesque, monstrous child (by virtue of his commensurate immaturity). If this hardly makes him relatable or endearing, it certainly serves to mitigate his historic quotient of detestation.”