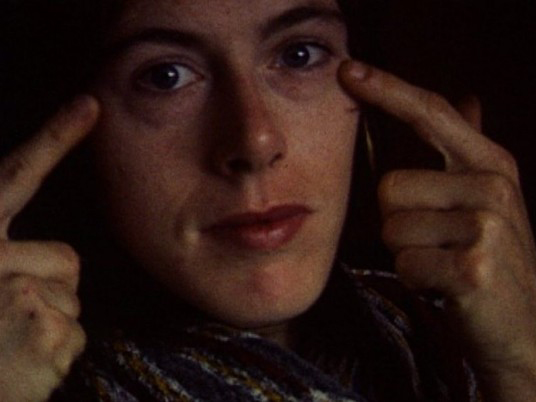 Anne Charlotte Robertson’s Five Year Diary is a multiform work including word, moving image, sound and food diaries and spans not five, but rather forty years of the artist’s life. Robertson started this diary in 1981 after achieving a degree in Art and Psychology at the University of Massachusetts, Boston. In the ’70s and ’80s of the 21st century, the Boston and Cambridge area was fruitful for film culture; especially for avant-garde and experimental work, as well as for documentary and animation film. The film programs of various sizes at the many different institutions attracted teachers such as Bruce Conner, Susan Pitt, Jean Rouch, Saul Levine and Robert Gardner. Robertson was self-taught and independent: she worked alone and in relative obscurity. Not only does her monumental diary, a work of radical transparency, give insight to the mental health, food habits or amorous obsessions of the maker; it also comprises many of the occupations of second wave feminism.

“Everything the mirror has seen
Must go into this tape right here.”

“Although it plays a constitutive part in the work, Five Year Diary is much more than Robertson’s illness. As a diary, the work is always in conversation with the gendered history of recording. Historically the personal diary has been one of the very few aesthetic forms from which women were not barred. A space in which the often overlooked details of women’s daily lives can be recorded and female subjectivity explored, the form is what Adrienne Rich has rightly called ‘that most female and feminist genre’. Documentation of the personal is thus always a political act, and it is no less political in Robertson’s hands, in a work that finds its very being in the act of documentation.”

“As her written diaries make clear, Robertson’s artistic voice first found expression through a committed, inwardly-focused writing practice that she later adapted and transposed to a prolific, long-form, performative Super 8 mode. Reviewing these papers, held at Harvard University, one immediately discovers an avid and precocious diarist-poet. The earliest entry, from December 1960, is an autobiographical narrative titled ‘Is This my Life?,’ composed when Robertson was 11 years old. The inventive, self-analytical, ambidextrous writing, encompassing T.V. scripts, poetry, lists, plays, reports, and annotated ephemera, in addition to daily personal diary keeping, represents a major, complex creative endeavor in parallel to her more publicly-facing film production.”

WHEN WILL DESPAIR STOP?
~ when I read,
write
film
every moment “Robertson is like a Bernadette Mayer of the quotidiano, in the domesticity of life. She envelopes her images in a double stream of consciousness – to the point that her voice often appears in both audio tracks of the film simultaneously, overlapping different narrations, and contributing to a sense of chaos, stress, and confusion. Her films are like Mayer’s journal lists and writing experiments, which include dreams, food, finances, love, mail, and gardening. All theories of execution are slippery and in changing motion. Life is one of subtle fleetness, fleeting pleasures, and inevitable but jumbled truths. Anxieties and depression unfold with urgent intensity. Her meta-narrative maneuvers in a poetic fashion that has no relationship with the work of a documentarian.”

“Robertson is perhaps best understood as an "outlier", to use Lynn Cooke's term, an artist who navigated that rich interstitial space between the vanguard center and that ambiguous periphery associated with the outsider artist. In this way Robertson's films engage in a rich and knowing dialogue with the avant-garde films and traditions embodied by touchstone directors such as Marie Menken and Jonas Mekas, while also maintaining a steadfast and vital fixity on her own singular life experience.”

“In those reels and in others, the sound is densely layered – sound on film playing simultaneously with sound on tape, or multiple tapes – creating a complex, polyvocal narrative. (In Reel 23, she narrates her nervous breakdown in two recordings – one taken at the time and one from a later date – which weave together and interrupt each other like an interior monologue.) She sometimes pairs audio tracks with non-corresponding footage, or a real-time audio recording played over sped-up, time-lapsed footage, creating a dissonance of the visible and audible that conjures the entanglement of thought and sensory perception. She collapses hours of film into ghostly, frenetic bursts of activity and uses hundreds of single shots to create stuttering stop-motion animations of herself, other people, objects. The manic, speeding energy of the frequently time-lapsed footage within the context of Five Year Diary’s marathon duration comes very close to what time feels like – fast and slow, momentary and unending.”

“Although it was only exhibited in this form a handful of times, Robertson envisioned marathon screenings of her always-expanding cinematic diary in a living room-style space: what she called ‘a home rec-room fall-out shelter’. Here, audience members could watch the reels of her diary while also reading the many written diaries she had kept over the years; they could look at the food diaries recording what she ate every day and how much she weighed; and listen to the audiotape diaries that recorded her days and fluctuating states of mind and also acted as letters to the man she was in love with.”

“In the garden too, everything has significance for Robertson and her camera. She films heads of roses, sunflowers and marigolds in frontal close-ups—as one might film a face. She frequently refers to flowers as her own children. She often films the moon, uses it like a clock face to measure the passage of time as well as changes in her mood. She synchronizes the planting of seeds to lunar phases. Through this conception of gardens as vibrant fields full of interacting forces, Robertson’s films show a keen perception of the myriad agencies palpable in the natural world. She anticipates current ecological theory that contextualizes human existence within a larger system of non-human elements.”

“I thought I’d focus on all the things I ever did that were wrong, and then I’d put them, one by one, into the films, along with the bingeing, and get perspective so I could shed bad habits.”