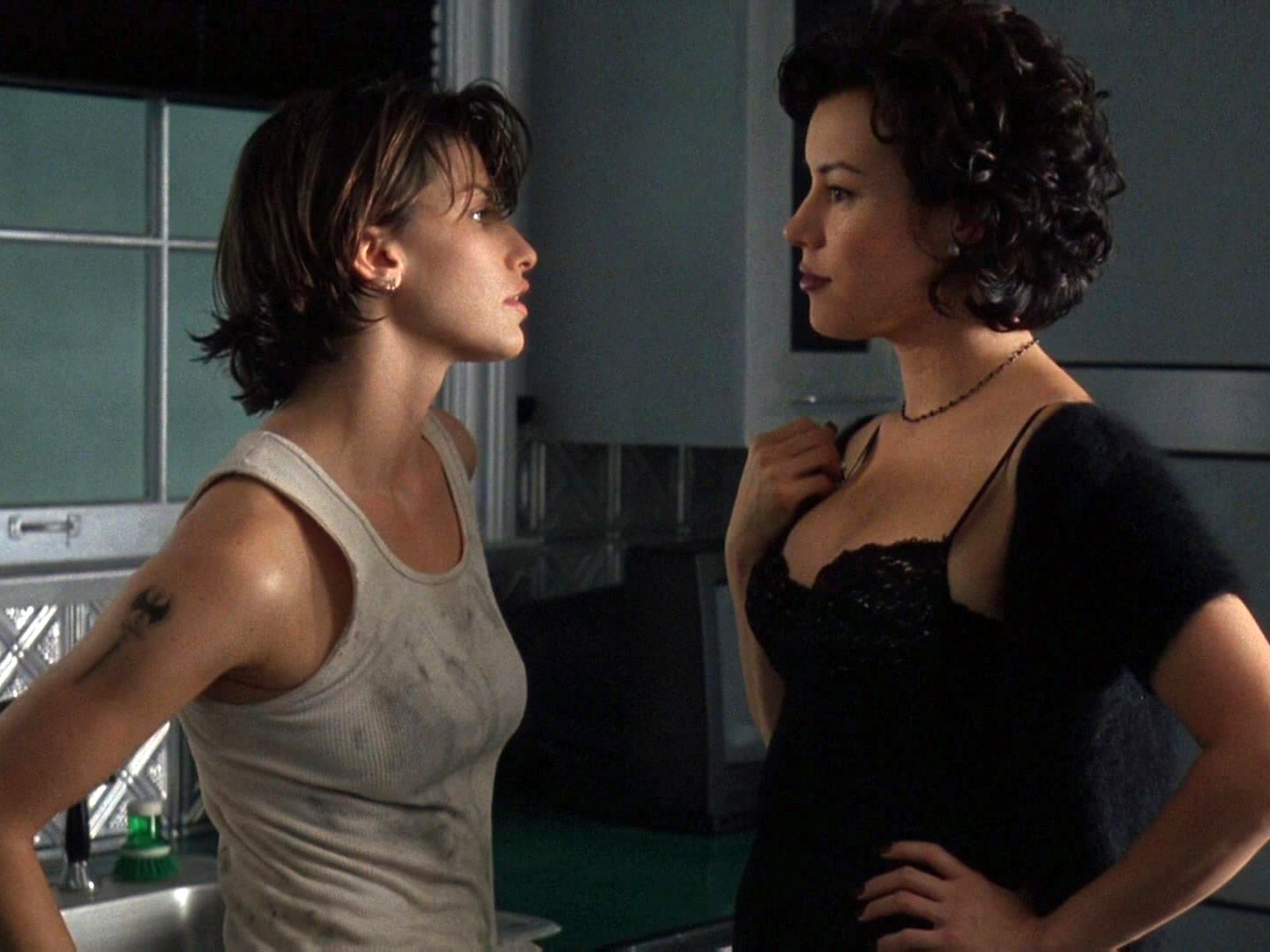 Tough ex-con Corky and her lover Violet concoct a scheme to steal millions of stashed mob money and pin the blame on Violet’s crooked boyfriend Caesar.

“Bound is one of those movies that works you up, wrings you out and leaves you gasping. It’s pure cinema, spread over several genres. It’s a caper movie, a gangster movie, a sex movie and a slapstick comedy. It’s not often you think of The Last Seduction and the Marx Brothers during the same film, but I did during this one – and I also thought about Blood Simple and Woody Allen. It’s amazing to discover all this virtuosity and confidence in two first-time filmmakers, Larry and Andy [recte Lana and Lilly] Wachowski , self-described college dropouts, still in their 20s, from Chicago.”

Gadfly: Everybody’s influenced by the past. Some of your shots are great in Bound. What films moved you to develop your cinematic view? Was it Orson Welles, something you learned in film school, or what?
Larry [recte Lana]: Well, we’re college drop-outs. I don’t know, we really like Billy Wilder movies. Sunset Boulevard made a huge impression when I saw it when I was young. Same with Lost Weekend. I always really liked Hitchcock movies a lot.
Andy [recte Lilly]: Strangers on a Train.
Larry [recte Lana]: A great movie. And they’re trying to remake it. I just can’t understand that. Psycho’s a great movie.
Andy [recte Lilly]: We’re great fans of Polanski. Repulsion is a great, great movie. A great-looking movie.
Larry [recte Lana]: Huston is another big one from the past. Huston movies. Treasure of the Sierra Madre was always one of my top ten picks.

“The Wachowskis’ script is fairly straightforward in construction, but they introduce just enough complication to keep you guessing. The framing device – seeing a bound (Oh! Do you think that’s where the title comes from?) Gershon alone in a dark room – hints at a situation gone awry without tipping the film’s hand about how we got there. It also proves to be the Wachowskis’ best script from a dialogue perspective; they know noir well, and they incorporate its trappings and tics without making the words feel cliché. Especially in the scenes between Tilly and Gershon, the screenplay has an almost screwball sense of playfulness. There is certainly a harder edge to the insults, but the way they throw words back and forth wonderfully recalls the rhythms of that subgenre. [... "The noir trappings, the dialogue, the examination of identity, the fearlessness to portray lesbian attraction on-screen for more than titillation, the investigation of technical ability in search of personal directing style — it makes Bound not just their first film, but their best complete effort to date. The Matrix proved they could create massive worlds and pose incredible questions while making your heart race. Speed Racer is perhaps the most honest expression of a “live-action cartoon” ever. Cloud Atlas is so a feat of incredible ambition. However, pound for pound, moment to moment, they have never so fully realized their goals as they did with this small, quiet noir that they nearly did not get to make because they valued the truth of it — a story of two women in love — over the studio’s money."

“We’re of the opinion that film is still first and foremost a graphic medium and should be about images more than it should be about talking heads. Talking heads are nice and all, don’t get me wrong, but novels do talking heads a lot better than movies do. And I think that movies should take advantage of the fact that they are about images and pictures. I don’t think people take advantage of that enough. It always disturbs us when people criticize Bound for being too stylized. Nobody ever criticizes movies for being totally boring-looking like an ABC after-school special.”

“On Bound, the Wachowskis also began their relationship with cinematographer Bill Pope, which lasted through The Matrix Revolutions. Pope’s fluid camera movements, angles, and framing impress throughout the picture, enhancing every moment. The whole film is shot within a small handful of interiors, yet Pope and the Wachowskis make excellent use of their space. Overhead angles that remind us of Hitchcock, tracking shots that zip along the length of a telephone cord to follow an important call, and body-mounted cameras augment Pope’s already slick, moody lighting and the Wachowski’s stylish interiors. Even during the single lesbian sex scene, the viewer’s eyes are less concerned about the two nude lovers wrapped up in each other than the bravado way Pope’s camera moves in from a master shot, pans around them, and ends in close up on their orgasmic faces. Bound is a story that would be fascinating even without an expert visual sense, but the Wachowskis take great care in their film’s visual luster. One of its most striking visuals is Caesar’s death scene, where he’s shot while standing in a pool of white paint, the red spatter dripping against paint in a contrast that cannot help but recall the climax of Akira Kurosawa’s Drunken Angel.”

“We think that not only gay people or queer people live in closets. Everybody does. We all tend to put ourselves into these boxes, these traps. And so what we tried to do is we tried to define as many of the characters through the sort of trap that they were making out of their lives. Getting out of the closet was meant to take on a bigger meaning than just the typical gay meaning.” 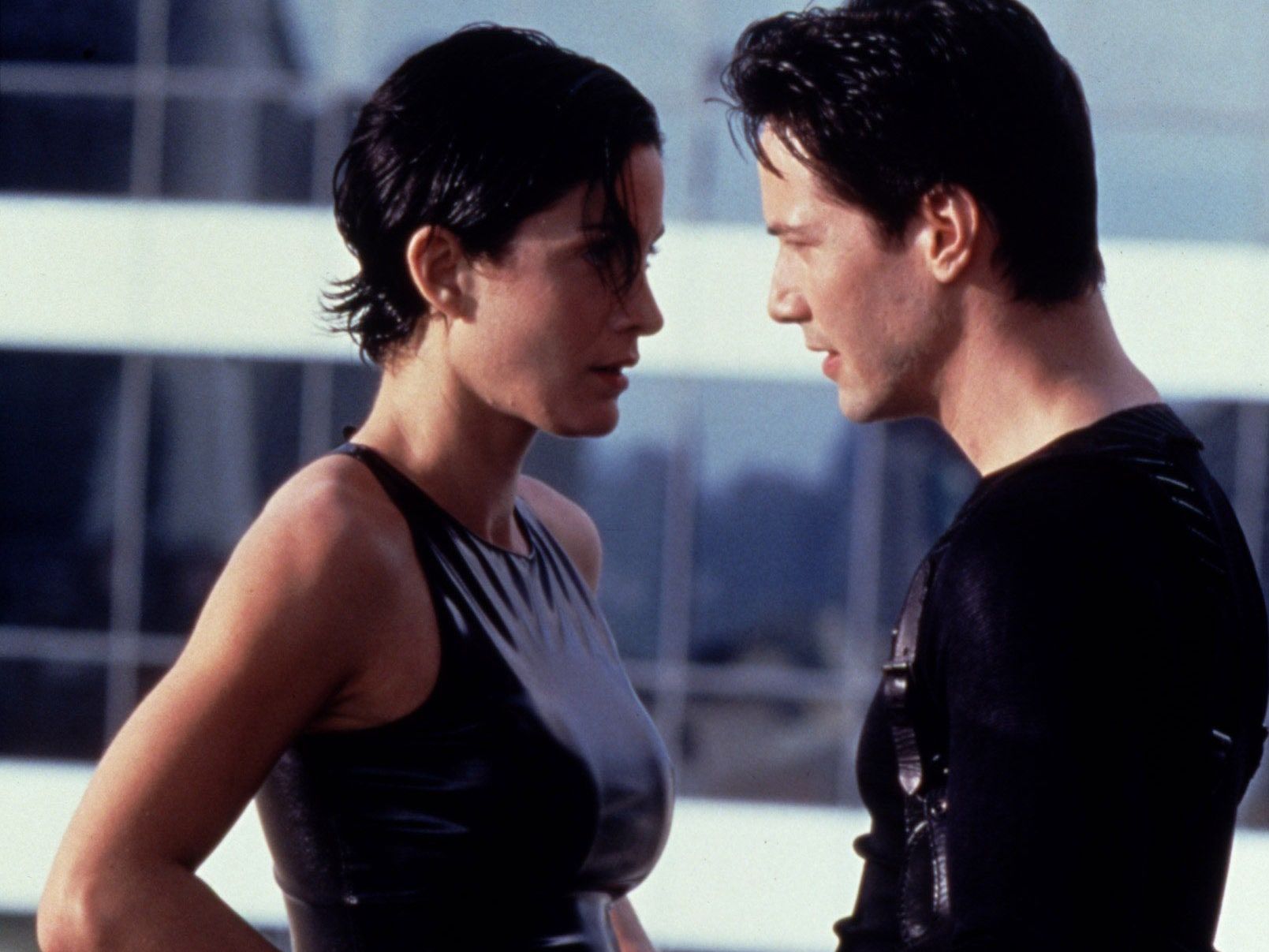 Computer hacker Neo (Keanu Reeves) discovers that reality as we know it is a simulation used to control the human population. With this new knowledge he must join the rebellion to fight this, even if it means accepting a life of danger.