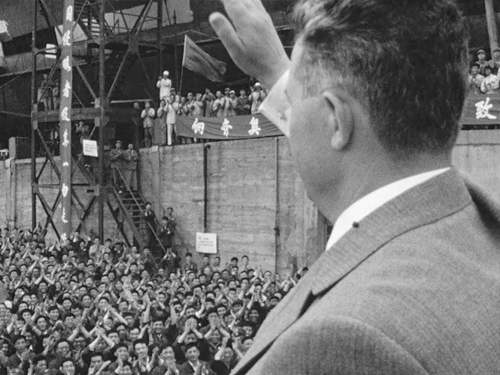 The Autobiography of Nicolae Ceausescu by Andrei Ujică is a film made from archive footage showing the power of the Romanian dictator between 1965 and 1989. The filmmaker uses a process of transforming the original status of the images. The result enables us to raise specific questions about the way power is shown, the balance of power involved, or how one man can be given total power, and in more general terms, how he can obtain it. If, Ceausescu obsessed by his own image, was caught up in hagiography, Ujica, for his part, subtly traces the excessive praise in a finely orchestrated montage and a soundtrack free of all commentary. This reading tries to characterise this sort of documentary by distinguishing, on the one hand, the propaganda mechanisms determining the internal politics of the Conducator and on the other hand, the strategies of his foreign policy. On the first issue, the film portrays a man who cares, constantly reminding us of his complete devotion to the Romanian people and yet in the end they were let down. One of the great qualities of the film is that it gives us the chance to measure, over time, the erosion of power, the inevitable fall of the dictator. As for the second issue, we can observe with fascination, Ceausescu’s wish to be recognised that willingly extends beyond the borders of Romania in a bid to fraternise with the leaders and the people of other communist countries, in a gesture of hypocrisy barely hidden (but revealed through Ujica’s aesthetic and theatrical mediation) towards the leaders of the western democracies. In this way, Ceausescu’s political schemes are shown to be what they really were, an usurpation of power.1

“After all, a dictator is simply an artist who is able to fully put into practice his egotism. It is a mere question of aesthetic level, whether he turns out to be Baudelaire or Bolintineanu, Louis XVI or Nicolae Ceausescu.”

“Whether he was shedding real tears or keeping a smile at bay, Ceausescu rarely seems to have done anything without a camera whirring nearby. Here he is in black and white, and there in color; here with sound and there without. Here and there he kisses gaga, swooning women; dances with villagers; claps old-timers on the back. Always, there are the people, massing and waiting and waving. Sometimes those masses gathered in Romania and at times in China and North Korea – both countries put on jaw-dropping shows – and also farther afield in Western countries like Britain that were willing to roll out the red carpet for Romania’s peripatetic first couple.

Did the Ceausescus see what we see, what Mr. Ujica, working with his terrific editor and sound designer, Dana Bunescu, makes us see and understand? It’s unlikely, though it’s hard not to notice the difference in Ceausescu’s posture during an early visit, filmed in black and white, to a food market, its stocked shelves groaning with proletariat bread and Party promises, and a later, grimmer visit to a market shot in color. He’s older, of course, and grayer, though the hair still towers longingly upward. But by then even the Romanian propaganda machine couldn’t obscure the despair hanging over the increasingly desolate cities and a people whose early smiles had long disappeared, along with the promises.”

Brandon Harris: You recount Ceausescu’s rise to power and brutal reign seemingly from his own chilling, romanticized point of view using previously unused state propaganda footage and home movies. Why did you choose the way into his and Romania’s story?

Andrei Ujica: There are some reasons for that, philosophical ones, aesthetic ones and some related to cinema itself. If we begin with a philosophical observation, and I’m quite sure I’m not the only one who thinks this, immediately after a major historical event happens, in our case the change of epoch in 1989, the proper way of approaching it is not a historiographical, meaning scientific, one. During such times, artistic means are more adequate in order to create „simulation models“ of the historical complexity, which happens because they incorporate the psychological component of reality. This makes narrative media, the ones that can recreate the theater of history, may them be the Novel or the Cinema, able to articulate an implicit analytical discourse of psychology of history. The greatest author in regards to the psychology of history was and remains Shakespeare. Later, towards the end of the 18th century and into the 19th century, the representation of history became more novelistic, so that history was told in chapters which included theatrical scenes. By the end of that century, you had a massive work, in the sense of a model of aesthetic simulation of history, like Tolstoy’s War and Peace.

All of this is to say that, after the change of age in ’89, we had a major philosophical crisis because the entire utopian constructions that came from the Enlightenment suddenly imploded. The academic theoretical discourse has been confronted with this crisis (one of the most significant in the history of philosophy) ever since, its main preoccupation being the sorting of books inside libraries, where entire shelves full of “reference works” have turned overnight into “waste paper”.

Here is another reason to try to understand the events which occurred twenty years ago and what caused them through aesthetic means. If you are working in a narrative medium like the cinema, then you are probably attracted by the psychological complexity of reality, for that is what narrative cinema is and can do. As far as I am concerned, my major interest has always been directed towards a cinema of reality, which tries to reformulate the equation between document and emotion. And, to my great joy, I discover that I was not the only one preoccupied by this lately. I am convinced that it will be one of the major developments in the decade that has just begun. The emergence of new possibilities in the cinematic discourse on the border of fiction and non-fiction is the most interesting area of development in cinema at the moment. 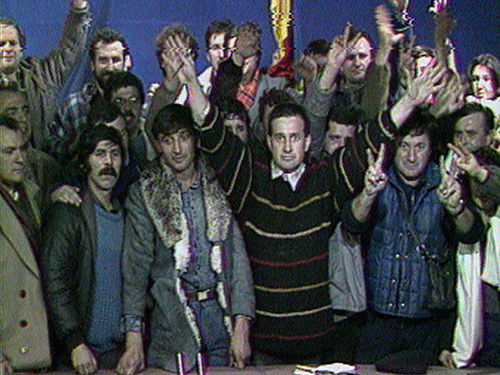 In Europe in the fall of 1989, history took place before our very eyes. Farocki and Ujica's Videograms shows the Rumanian revolution of December 1989 in Bucharest in a new media-based form of historiography.