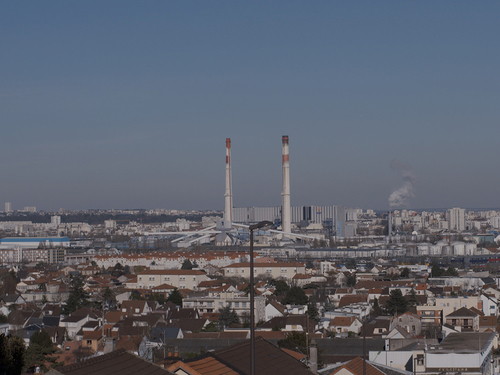 Anna Gritz: Watching the new film Also Known As Jihadi in the aftermath of the recent attack in Berlin resonates in a particularly somber tone, especially knowing that the idea for the film originated in the days following the massacre in Paris in November 2015. The film traces the movement of the protagonist, Abdel Aziz Mekki, through long landscape shots chronicling his journey from the outskirts of Paris, via Egypt, to Syria to join the Al-Nusra Front, a precursor of the Islamic State, and back, and offsets them with ephemera reporting on his activities as recorded by government surveillance. Can you speak about how the events in November last year shaped the project that would become Also Known As Jihadi?

Eric Baudelaire: Lately, opening a newspaper each day reminds me of a passage in Franz Kafka’s diary that goes something like this: ‘This morning, I watched the destruction of the world as an attentive spectator, and then I got back to work.’ The question is: What is our work, and how does the chaotic order we are experiencing, manifested in killings in Berlin but also Beirut, Aleppo, Nice, Nairobi, or Paris, intersect with the work we do? Concerning the new film, it wasn’t so much the November 13 events in Paris themselves that triggered an impulse to get to work. It had more to do with the French prime minister declaring, at a commemoration ceremony shortly thereafter: ‘Explaining jihadism is a bit like wanting to excuse it.’ A few weeks later, Alain Badiou gave a conference about the massacres in which he replied to the prime minister, saying that declaring something to be unthinkable is a defeat of thought, and therefore a victory for criminal and irrational behavior. I think my decision to get to work with the new film stems from my visceral disagreement with the prime minister, and my partial unease with Badiou’s reply. I am interested in forms that explore a space in between understanding and the impossibility of understanding.

The core structure of Also Known As Jihadi is based on the combination of two types of material. First, footage of land and terrain in the tradition of Masao Adachi’s so-called landscape theory or fukeiron, a strategy that Adachi implemented in his 1969 film AKA Serial Killer, which suggests the possibility of creating a portrait of someone through capturing the physical landscape that shaped him or her during their lifetime. And second, shots of judicial documents that follow the movements and actions of the lead character and his associates. This is not the first time that you have worked with the foil of Adachi’s landscape theory. It featured prominently in your film The Anabasis of May and Fusako Shigenobu, Masao Adachi and 27 Years without Images (2011). What made you return to it for this project, and how do you see it working in relation to the legal material?

The important word in your question is ‘foil.’ I am not interested in a dogmatic way in the so-called landscape theory. Not as a disciple. I am interested in its potential to raise questions about the social and political context of a place, and the relationship between this context and the kind of alienation that leads certain individuals toward trajectories of violence. It seemed like an interesting starting point to explore the journey undertaken by the young man who is the subject of Also Known As Jihadi. But the title is also important: it implies that the true nature of this person remains hors champs, outside of the frame. The film is about what he is ‘also known as.’ I use the landscape theory as a foil because I accept the notion that it fails, that it is inexact, that it raises questions instead of giving answers, and this is the only position I feel capable of adopting for a film like this. The same ambiguity is true about the surveillance and judicial documents that form the narrative track of the film. They tell a story. But it’s the story told by the state surveillance and judicial apparatus in the face of a phenomenon it doesn’t really know how to process. A thousand French men and women have gone to Syria. Once there, it becomes very complicated to know who traveled in solidarity with the Syrian people fighting Bashar al Assad; who has followed the path because they felt they didn’t have a place in France; who traveled with hopes for martyrdom; who will return dejected and disappointed; and who will return intent on shooting up a crowd at a death metal concert. I combed through piles of court cases concerning returnees who were judged, often with a very heavy hand, in the aftermath of the November Paris attacks. I decided to look for trajectories that contained a certain ambiguity.

The environmental and legal landscapes that you are presenting in this film side by side are introduced through long black frames that allude to the opening and closing of a camera shutter. The images illustrate the text while the documents caption the images, yet the ‘fictional’ nature of the film suspends the accustomed form of reading one as verifying the other. How do we weigh the value of one form of evidence against another?

I made the film from two kinds of landscapes: geographic landscapes shot with the camera, and judicial landscape revealed in excerpts of documents produced by the police and the courts. When I brought the material to the editing table, I was not working with it as evidence. I am neither a policeman nor a journalist. I’m not even a documentarian. Along with Claire Atherton, the editor of the film, who spent many years cutting films with Chantal Akerman, we looked at the material for its organic cinematic qualities. All the names of people and places were changed. It matters to me that the source material, initially, is extracted from a real situation because I am interested in making films that deal with the present for its ‘essential quality of being present’ to cite Charles Baudelaire’s ‘Painter of Modern Life.’ But once we start editing the film, I detach myself completely from any notion of objectivity or evidence, in favor of cinematic construction.

Can you give an example of these cinematic qualities that you are after, especially in regards to the role of fiction in the work?

It’s very difficult to put words on images. When we sat at the editing table with Claire Atherton, we watched thirty hours of footage shot on location, chronologically chronicling the life of the man we call Abdel Aziz Mekki. The clinic he was born in, the housing estate he grew up in, the schools he attended, on and on, until we reached the road in Turkey that leads to Aleppo, all the way to the border. We chose the images that are in the film by selecting those that felt ‘juste’. That is a French word that means something in between ‘just’ and ‘accurate.’ An image felt ‘juste’ when it contained an indescribable equilibrium between the movements of the camera, the uncertainty of these movements, and the descriptive qualities of the landscape. The camera searches for something, or perhaps it allows the viewer to search for something in the landscape. But this gaze cannot be oriented in a heavy-handed way; if it does, it fails. So the image has to ask questions, not propose answers. This is the cinematic quality we were looking for. Narrative qualities, descriptive qualities as well, but I think the hardest quality to achieve in this particular film is in the emotion carried by the camera movement.

Eric Baudelaire: The images are clearly from the present, but they’re very open-ended in the way the camera moves and the shots are constructed. The film is shot in CinemaScope, so it’s the wide panoramic format that you see in the old westerns. It’s the same shape as a fisherman’s net. I thought of the film as a kind of net designed to catch the projections of the spectator. And this open-endedness of interpretation is very important to me.

Benoît Rossel: What is Also Known As Jihadi about?

It’s a very loose remake of Masao Adachi’s 1969 film A.K.A. Serial Killer, which is about a young Japanese man, Norio Nagayama, who killed four people with a gun stolen from a US Navy base. He never explained his actions. As Adachi was scouting locations for a film based on these events, he came up with a radical idea: the footage from the location scouting was enough, it was the film. A.K.A. Serial Killer consists of a series of landscapes from the places where Nagayama lived or traveled to during the nineteen years before the murders. Also Known As Jihadi follows the same proposition: turn the camera around to shoot not the subject of the film, but rather the landscapes that he has seen. Then film the clinic where the subject was born in the Parisian suburb of Vitry, the buildings he grew up in, his high school, and workplaces. Then film the landscapes of his departure to the Middle East: Egypt, Turkey, and the road to Aleppo where he joined the ranks of the Al-Nusra Front in 2012. And then, finally, film his journey home. Once again, it’s a kind of anabasis, a series of landscapes contextualized by excerpts of official documents: police interrogations, wiretaps, and surveillance reports. Together, they form a kind of genre film, a slow legal thriller made up of landscapes.

How do you deal with or relate to a subject that’s more directly political and controversial?

It’s complicated to make a good film about a controversial subject because you have to transcend the controversy. But I think it’s important to try because these are subjects that shouldn’t be left strictly to journalists and political scientists. When you make a film about terrorism, secessionism, or about a jihadi, you are choosing a topic that doesn’t generate unanimity. The Anabasis deals with the Palestinian-Israeli question; Letters to Max is a film about a secessionist territory that emerged from the civil war in Georgia; and Also Known As Jihadi is about a young Frenchman who goes to fight in Syria. In making films that delve into dangerous subjects, I’ve tried to explore what these stories or journeys are about. I tried to think about them without coming to any kind of legal or moral conclusion. It’s very easy to fuck this up and make a heavy-handed film that answers questions instead of asking them. My perspective as a filmmaker usually begins with a sense of loss in the face of the incomprehensible, a feeling coupled with the intuition that the incomprehensible must have its reasons. And I’ve tried to find forms that reflect this position, accepting the feeling of loss rather than trying to resolve it. 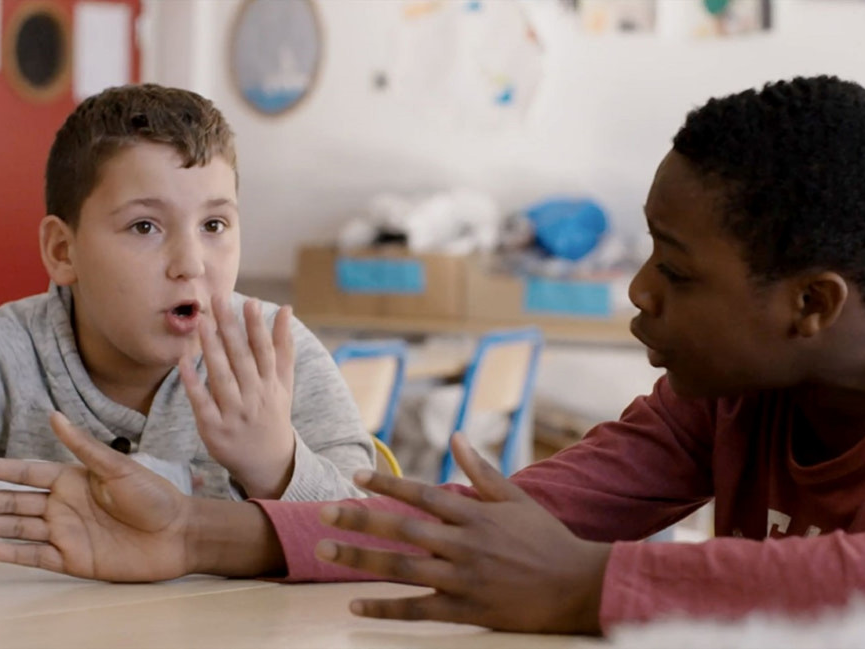 For four years Eric Baudelaire regularly met with students from the film group at Dora Maar middle school in Saint-Denis. Time for them to grow together, time to find the form of a film in which they would be the true subjects: its characters, its authors and its promise.