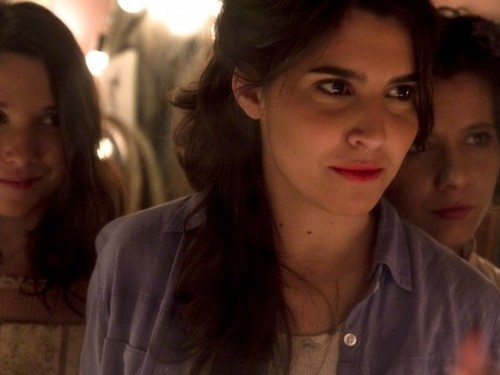 “Viola’s meagre plot but rich plotting begins in an all-women Shakespeare performance melding texts from various plays. It there transitions that drama (and text) to the backstage from which it moves effortlessly into a Rohmerian discussion of the relationship between romantic ethics and one’s life philosophy, before breaking roughly in half to focus on the titular girl who bikes around the city hand delivering/selling bootlegs of movies to several people, an audience eventually including the actresses from the opening play.

A highly mysterious film, Viola is held to this earth by long takes of flattened space letting the actresses’ faces shift around and move across the image plane as they navigate their texts. Lines from several Shakespeare plays are apparently also integrated across all of the film’s dialog, yet it retains a sinuous ensemble of lovely, highly acute and intelligent performances that are able to flow between quotations, rehearsals, repetitions, and ostensibly normal dramatic dialog with a beguiling naturalness.”

Film Comment: You’ve spoken of the text having a physical presence in your film. Was it Rohmer who said that words are something one can film, just like a mountain?

Matías Piñeiro: Yes, and I like that quote. I hate when categories are established. When people say, “That is so cinematic,” I think “What the fuck does that mean?” What is cinematographical? It’s not any one thing. Does it mean that there’s movement? It’s stupid. The quote from Rohmer gives a lot of freedom, that you can film a mountain and put it against a sound, a face. I also like this idea of fiction that works with the documentation of an object rather than with narrative convention: to shoot a fiction film, and to be interested in what’s real about that. No, not what’s real, actually, but what it provokes. I’m not so interested in the borders between reality and fiction. I like fiction, I like actors. For the last 10 years, everyone has been talking about using non-actors. But I like professional actors or a certain kind of professional actor. I like making a fiction that is not trying to mimic reality, but that is trying to provoke a reaction by setting things against or with one another. For me, a Rohmer film, it’s a confrontation of objects out of [which] some meaning will come. It’s like chemistry. He also talks about chemistry and combinatory processes. It’s all energizing somehow, what he says. Rohmer gave me courage to explore these kinds of ideas.