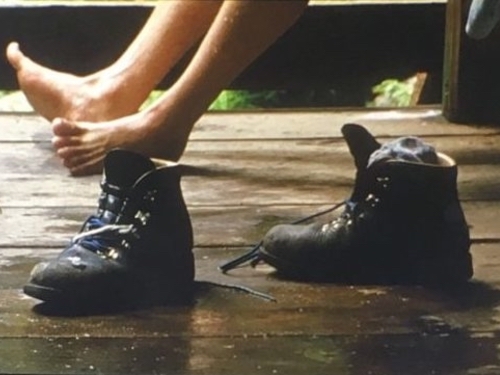 Two old friends, Mark and Kurt, embark on a weekend trip to connect, and they can’t. They miss the opportunity to express what they might want to express to each other. They can’t articulate what they want to say. – Kelly Reichardt

“I was approaching it the whole time as a western. Instead of guys proving their toughness, it's a battle of openness. I kept calling it a New Age western.”

”Old Joy combines the myth of the West with the sadness and uncertainty of post-9/11, talk-radio-infused America. The film was shot on DOP Pete Sillen's Aaton A-Minima Super 16mm camera, which has a half-size magazine limited to five-minute takes and is small enough to fit in a backpack and travel into the forest with a tiny crew of six.”

“I did want to set the exact period of time when George Bush was reelected, not just a loss, but another old joy: both elections were stolen, the loss of democracy. (...) ‘Old joy’ can stand for everything. The death of liberalism in America. Who could have guessed that the Christian Right would win the day? My first political memory is being pulled out of a pool at a friend’s house to watch Nixon resign, so it’s not like I grew up in the years of some American Dream or something. But at least living through Watergate, there was the idea that the wrong get punished and somehow things work back around. Not to paint this rosy picture, but I honestly couldn’t imagine that in my lifetime the Christian Right would gain so much hold over the entire world, and that things would escalate so quickly. (...) I think people my age have the feeling now that any kind of idealism, that any kind of justice would prevail, has been shot to hell. That’s the old joy of it. These guys not being able to be effectual – Mark is probably a guy who grew up with the idea of world peace, but at the end of the day he can’t even really forgive Kurt for whatever it is that he holds against him, or open himself up to a close friend. Old Joy has a feeling of my generation at a total loss.”

“I love the road-movie genre and, specifically, Monte Hellman’s Cockfighter (1974) and Two-Lane Blacktop (1971). Both in terms of the way Hellman shot these films and in regard to the sound design. I was also watching a lot of Satyajit Ray’s films and the ways he deals with nature. Same with Renoir and the Thai director Apichatpong Weerasethakul. It’s hard to say what has influenced me at this point since I’m in my forties. Last year in New York we had a full month of Ozu films. He also has a very steady camera and amazingly interesting framings. If I had to say which one of these is my main influence I’d say Ray in terms of how he deals with nature. Hellman was also working with very small crews, and he had a special way of dealing with silence.”

“Hovering in the background of Old Joy is an older, half-remembered film: Orson Welles's Chimes at Midnight (1965), his personal retelling of the Falstaff tale, assembled out of bits and pieces of Shakespeare. The riots of youth have given way to the responsibilities of middle age (of fatherhood, if not of kingship) and now the leader of the revels must be dismissed, put away into an encapsulated past – the ‘old joy’ of the title. Mark is no Prince Hal; he does not have the courage to confront his own plump, bearded companion directly and tell him, ‘I know thee not, old man.’” 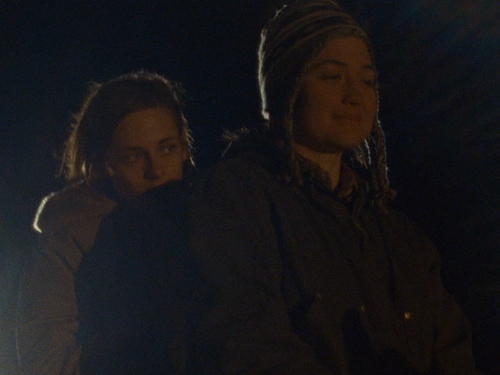