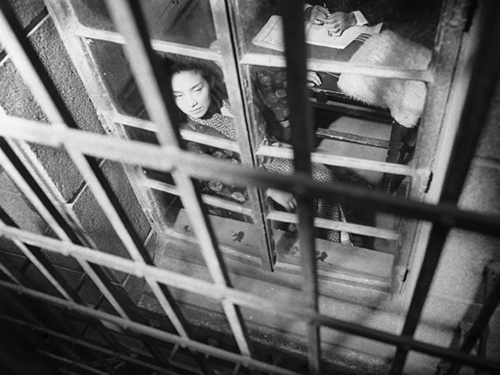 “Avant-garde filmmakers, in particular, Imamura Shōhei, contest this hegemonic ‘official’ version, or definition, of what essentially it is to be Japanese in an increasingly American-dominated global socio-economic and cultural milieu. While the ‘official version’ sought its foundations [...] in an ideological conception of a feudal historiography derived from Neo-Confucian moral precepts and political structures imported from China to the elite classes of Japan, and further modified along Christian lines in the late nineteenth century as Japan entered the international arena, Imamura in Insect Woman, Profound Desire of the Gods and The Ballad of Narayama constructs a fictitious pre-modern, timeless society founded on shamanistic beliefs and Shintō-derived mountain gods. As Katori explains: ‘Imamura’s main films were made in the period from the ruin of defeat to the period of high economic growth. People moved from the provinces (chihō) to the cities, there was a mass migration as the economy rapidly transformed from agriculture to industry. (Katori 2004: 10)’

The main female protagonists in Insect Woman, Intentions of Murder and The Profound Desire of the Gods all have a pervasive sense of authenticity that predates the advent of the modern socio-political world. In spatial terms their position in marginalized societies is symbolized through geography, as these characters have their origins in the remote northern parts of the main island, Honshu, or in the remote southern islands of the Okinawan archipelago. Ogawa writing in the journal Film Art (Eiga Geijutsu) in 1964 after the release of Intentions of Murder explains: ‘Imamura, from time to time, uses the phrase ‘originary society’ (kisō shakai) when speaking of people at the bottom level of the social hierarchy (teihen). According to [the academic] Matsushita Keiichi, this group comprises two thirds of the Japanese population, it is a society that has no relationship to the formation of history nor does it participate in history; it is a way of life where fathers and daughters sleep naked cramped together (zakone). It is a matter of course that incest occurs. In such circumstances, affection (ai) develops through incestual relationships, other forms of love (ren’ai), are they not fake? (Ogawa 1964: 66)’”

“Iconoclasts are meant to kill their idols, and so it’s fitting that Shohei Imamura launched into his career as if on a patricidal rampage. Like Nagisa Oshima, the other towering figure of the Japanese New Wave, Imamura (1926–2006) rejected the orderly, tradition-bound portrait of Japan that a previous generation of filmmakers had imprinted in the national and global consciousness. He started out as an apprentice to Yasujiro Ozu, and would take pains to distance his methods and priorities from those of his former boss. Several critics, including Donald Richie, have since pointed out that the two have more in common than they may seem to, in that both were obsessed with the notion of ‘Japaneseness.’ It could be they had very different ideas of the national essence. Or perhaps they just came at it from opposite sides: while Ozu, considered the most Japanese of Japanese directors, emphasized the taming and concealment of the natural state, Imamura, a master conductor of libidinal energies, affirmed it was to be found everywhere.”

“Often movement occurs even when it has no plot value – though it has, of course, enormous atmospheric value. In The Insect Woman, during the wake sequence the foreground is occupied by the extras and their enormous rosary. All dialogue, however, is contained in the top of the screen, a row far in back occupied by the nearly invisible principles. The ritual grinds on, meaninglessly, undercut by the profane dialogue, the entire mise-en-scène thrown away, as it were, in the interest of bringing us closer, making certain we spot the source, find an authenticity amid all this movement.”