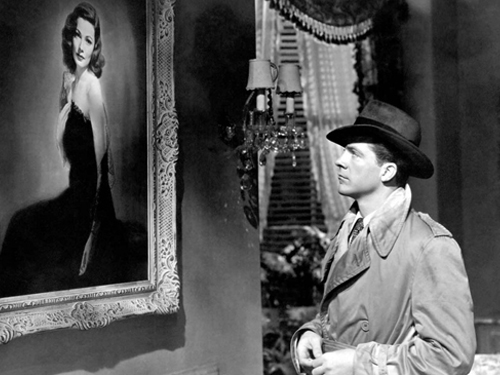 “I still remember the scene: Zanuck owned this beautiful house on the beach at Santa Monica, and on entering you walked through the living-room. The butler took me to the pool, and Zanuck sat at the pool with his back to me.The butler said:"Mr. Preminger is here," but Zanuck didn’t rise, or offer me a seat o rany thing. Speaking tersely, he said: "You're working on several properties. I think two of them. Army Wives and Laura, are not bad. You can produce them. As long as I am at the studio, you will never direct. Goodbye." I was dismissed like an errand boy.”

Otto Preminger: It was customary at Fox for the director to make the first cut, which was then shown to Zanuck. The routine was that Zanuck and the director and the cutter sat in the front row of the projection room. The next three rows were filled with yes-men, real sycophants who had learned croquet so they could play it with Zanuck. They had also learned to read – from the way Zanuck sat or the way his neck wrinkled – whether he liked a picture or not. So, before he could say something, they were usually in agreement with him. When the screening of Laura was over, nobody had laughed, nobody had said anything. It was like a funeral. Zanuck turned to me and said, “Well, Byrnie was right. We missed the bus on this one.” Then he left. I walked out to the Fox parking lot with my cutter, Lou Loeffler, who liked the film very much. We both couldn’t believe the reaction to it. I remember we stood out there in the rain for an hour discussing the picture: “It can’t be all that bad … But this scene was good … How could they not like it?”

“At 9 o’clock there we were, Zanuck, my cutter and I and not the yes-men any more who, by the way, had all sent letters with suggestions which were unbelievable – they were so stupid! In the last row of this four-or-five row projection room was Walter Winchell with a girl. For the first time when the picture went on, particularly the dialogue of Clifton Webb, there were laughs from Walter Winchell, giggles from the girl.The picture was over, and Winchell gets up and says to Zanuck (I don't know if you ever met him, he speaks in short sentences) “Darryl, that was big time – big time – Great, great, great! But you are going to change the ending? What's happening at the end? I don’t understand.” This again is where you can see that Zanuck, who is a flexible and a professional man, instead of being mad like the other people might be, he looked at me and said: “Do you want to have your old ending back?” I said: “Yes, sure.” He said; “O.K.” I threw everything out, all the re-takes, put the old ending back, we had a preview and it was brilliant. That is the story of how Laura became a success, and how I became a director again.”

Otto Preminger: The gimmick. You see, a suspense picture depends mainly on finding a new gimmick.

“[spoiler alert] When a murder mystery possessing as much sustained suspense, good acting and caustically brittle dialogue as Laura... comes along it might seem a little like carping to suggest that it could have been even better. As the story of a strangely fascinating female who insinuates herself into the lives of three very worldly gents, much depends, of course, upon the lady herself ... Now, at the risk of being unchivalrous, we venture to say that when the lady herself appears upon the scene via a flashback of events leading up to the tragedy, she is a disappointment. For Gene Tierney simply doesn't measure up to the word-portrait of her character. Pretty, indeed, but hardly the type of girl we had expected to meet. For Miss Tierney plays at being a brilliant and sophisticated advertising executive with the wild-eyed innocence of a college junior. Aside from that principal reservation, however, Laura is an intriguing melodrama ... Only Miss Tierney seems out of key. Perhaps if Laura Hunt had not had such a build-up, it would have been different. Anyway, the picture on the whole is close to being a top-drawer mystery.”

Peter Bogdanovich: Have you found, in later years, that the success of Laura, coming so early in your film career, was more of a hindrance with critics than an asset?

Peter Bogdanovich: I don’t ever think of anything in terms like those. Besides, Laura became a classic only later on, which is a great satisfaction for me. I got very mixed reviews at first – some really bad ones, in fact. I met one of the reviewers after he retired, and he told me, “I saw Laura on TV the other day, and it is one of the greatest pictures I’ve ever seen.” I didn’t have the heart to remind him that he wrote an absolutely devastating review of it when it opened.

“That Laura continues to weave a spell – and it does – is a tribute to style over sanity. No doubt the famous musical theme by David Raksin has something to do with it: The music lends a haunted, nostalgic, regretful cast to everything it plays under, and it plays under a lot. There is also Clifton Webb's narration, measured, precise, a little mad: “I shall never forget the weekend Laura died. A silver sun burned through the sky like a huge magnifying glass. It was the hottest Sunday in my recollection. I felt as if I were the only human being left in New York. For Laura's horrible death, I was alone. I, Waldo Lydecker, was the only one who really knew her.”... the whole film is of a piece: contrived, artificial, mannered, and yet achieving a kind of perfection in its balance between low motives and high style. What makes the movie great, perhaps, is the casting. The materials of a B-grade crime potboiler are redeemed by Waldo Lydecker, walking through every scene as if afraid to step in something.”

“Laura opens by introducing us to a world of glass, of fragile and precious objects on display, a closed world (Waldo’s apartment) within another closed world (Manhattan, which Waldo, who narrates the scene, imagines dead). Everything is suspended; there is a sense of waiting (“I had him wait,” says Waldo in voice-over as the panning camera reveals Mark), but a waiting for nothing, without anticipation. Since Laura is already dead, no future is indicated; there will be nothing but a melancholy return into the past. “I noticed that his attention was fixed upon my clock.” Waldo’s narration announces the importance of the clock, with which the film, the inner film (framed by the images of Laura’s portrait under the opening and ending titles), will close. The clock is linked to Laura and to her death: Waldo’s voice-over specifies that “there was only one other in existence—and that was in Laura’s apartment, in the very room where she was murdered.” The duplication of the clock suggests that, in Laura, there are two times. The first is a stalled, dead time, from which nothing new can emerge: the time of Waldo’s apartment, of the dead and abandoned New York, of a narrative that takes place under the sign of death and inside a circle that has already closed or whose closing the narrative traces (a process represented in the lines from Ernest Dowson that Waldo recites in his last radio broadcast: “Out of a misty dream / Our path emerges for a while, then closes / Within a dream”). The second is a time of change, from which the new constantly emerges, in flight from a past that it desires to renounce and betray. It is fitting that the apparitions of Laura in the flashbacks are characterized by a light rhythm and a rapid tempo, that she is seen dancing in the flashbacks, that they link her to music, and that when she returns, we should suddenly hear the sound of a clock ticking.”

“Where does this all leave us? It leaves us with a director who has made at least three impressive masterpieces of ambiguity and objectivity – Laura, Bonjour Tristesse and Advise and Consent, a director who sees all problems and issues as as single-take two-shot, the stylistic expression of the eternal conflict not between right and wrong but between the right-wrong on one side and the right-wrong on the other, a representation of the right-wrong in all of us as our share of the human condition. In the middle of the conflict stands Otto Preminger, right-wrong, good-bad and probably sincere-cynical. But don't take my word for it. See the movies and make up your own mind. Whatever your verdict, Preminger will thank you for your patronage and will keep his own counsels.”

“We’ve just lived one of the great moments of postwar American cinema.” 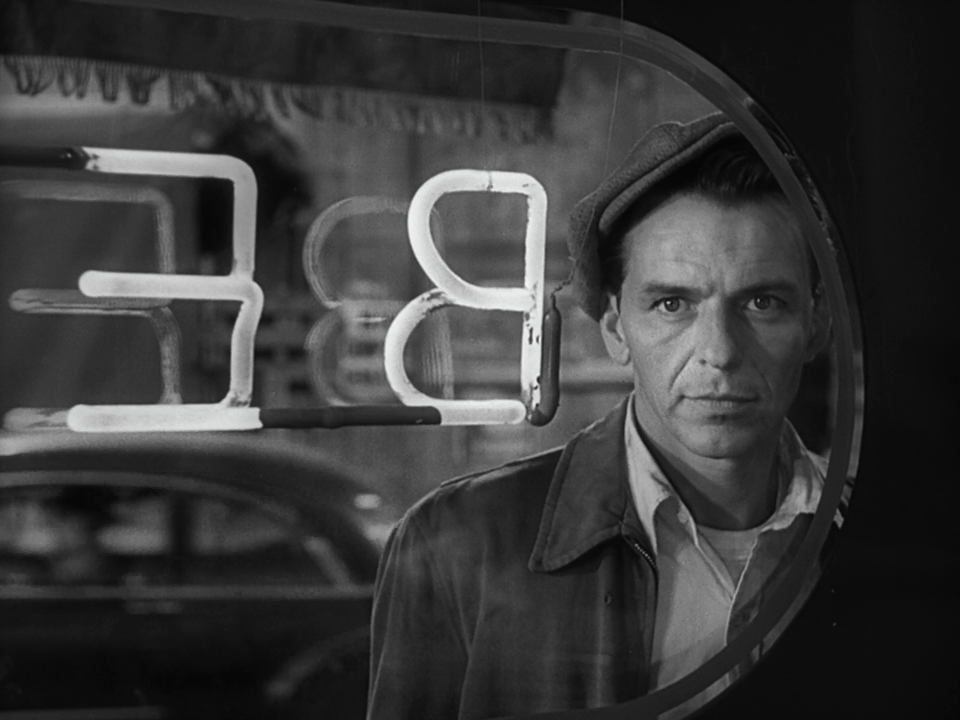 When illegal card dealer and recovering heroin addict Frankie Machine (Frank Sinatra) gets out of prison, he decides to straighten up. Armed with nothing but an old drum set, Frankie tries to get honest work as a drummer. 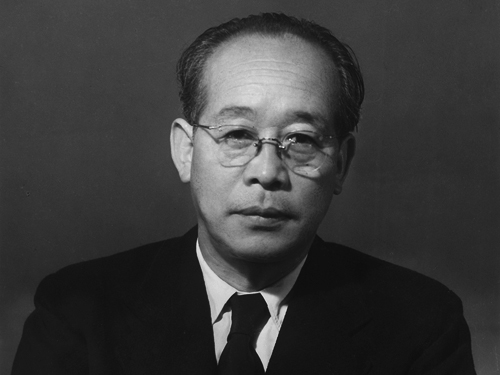 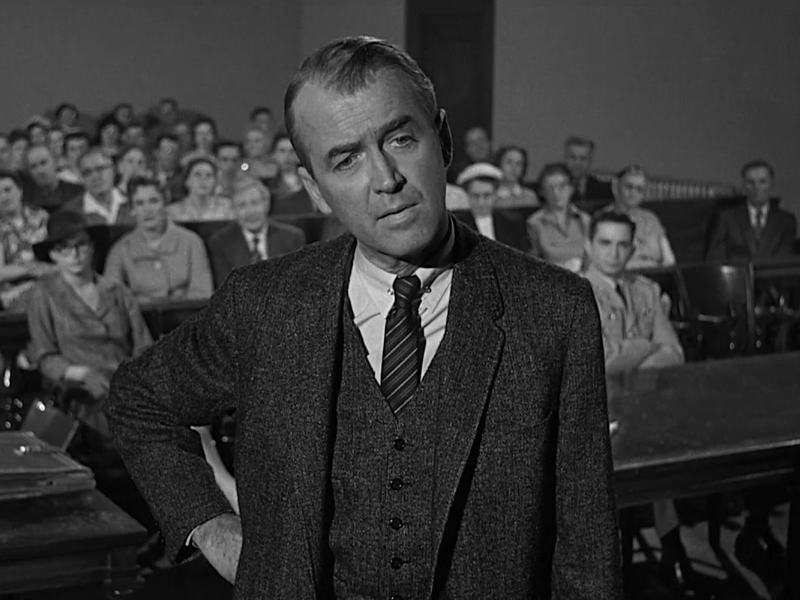 A small-town Michigan lawyer takes on the difficult task of defending a young army lieutenant named Frederick Manion, arrested for the murder of a local bartender who he claims raped his wife.