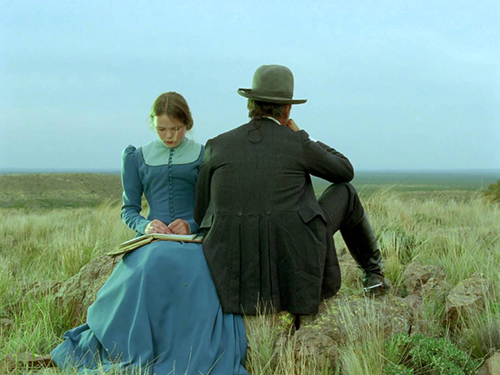 “It is necessary to understand with what vigor certain ideas seize certain men, who have passed through certain things and have occupied certain stations, in order to understand that a mission to the Ranquels [a tribe in northern La Pampa] can become, for a moderately civilized man like myself, a desire as vehement as a Paris embassy’s secretariat can be for a civil servant.”

“Jauja, the latest film by Lisandro Alonso, was a surprise for many critics. That’s not because it’s so different from his four previous features, but because it demonstrates that his cinema has a much broader range of possibilities than many previously assumed, and obliges you to look at the entirety of his work, as you would the work of any filmmaker of grand aesthetic ambitions.

Don’t be fooled by the fact that Alonso’s filmography can be described in just a few words: all five of his features deal with solitary men in desolate lands, though the hidden dynamic between a majestic landscape and a society off-screen provides the tension in each story. Alonso’s narratives exist in opposition to those that are articulated by means of a traditional script; he has always found it tough to write a treatment, that almost mandatory instrument for obtaining funding and ensuring that a project becomes a film. Until Jauja, his films had virtually no dialogue, much less any that advanced the plot or defined the characters. The primary needs and desires of Alonso’s characters (food, sex, freedom of movement, family) are on full display, but their inner lives are opaque even to the filmmaker, and that’s what gives rise to the atmosphere of these films, so seemingly simple and yet so difficult to interpret. [...]

Jauja also features one Colonel Zuluaga, an army deserter disguised as a woman who leads a band of natives dedicated to looting. Like Kurtz in Joseph Conrad’s Heart of Darkness and Coppola’s Apocalypse Now, Zuluaga faces the horror of barbarism by merging with it, switching sides and even gender. But unlike the solemnity of its European and North American antecedents, Jauja adopts a tone of humor and farce in order to portray the dilemmas of a civilization faced with the unknown. The comedic aspect is clear enough in the scenes at the fort, with its lecherous officials obsessed with Inge, or the theft of Dinesen’s horse and rifle as he sets about the killing of his daughter’s abductor. But it’s also evident in the whole civilizing enterprise, which is tinged with enormous confusion: to begin with, the white soldiers, being mestizos, are not so civilized in the eyes of the Europeans. This confusion corresponds to the particular history of Argentina. As in the case of Masilla, a certain duality existed in the psyche of the ruling class, who looked as much to France as to the Pampa for their sense of identity, never quite knowing where they belonged, while regarding the natives as gaucho barbarians – much as cinema gazes disconcertedly into the abyss between high art and popular entertainment.”

“Working with Timo Salminen, a Finnish cinematographer best known for his hyperrealist lighting, Alonso crafts saturated, fine-grain images of the Patagonian wilderness. Jauja is set almost entirely outdoors, in bright daylight, with the 35 mm stock – still at an advantage over digital when it comes to direct sunlight – registering every fluttering moss, wisp of cloud, and wind-stirred tide pool. There’s no empty space in its deep-focus compositions; when the camera moves, it’s in awkward, swiveling jerks that recall the first decades of filmmaking. Again, there’s that sense that a birth is being re-staged, and we’re returning to the days when just filming and projecting something constituted a kind of miracle. Except that this something is imaginary and, not to put too fine a point on it, imaginative. A bare horizon is like a black-box stage; it invites the viewer to accept the unseen, and treats every intrusion – a flayed body, a stray dog, a hand creeping into the frame out of nowhere – as an event.”