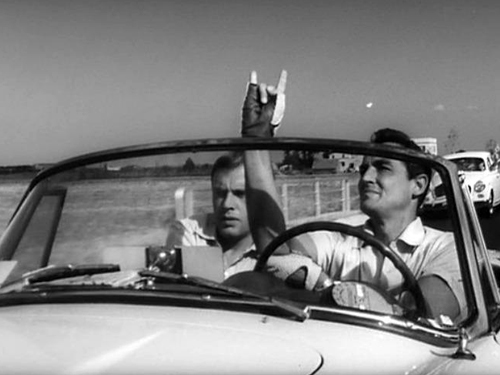 An impulsive braggart takes a shy law student for a two-day ride through the Roman and Tuscany countries.

“I like nothing more than driving. It relaxes me. I'll go anywhere as long as I'm driving.”

“If the road movie has a home, it's surely the United States. After all, the settling of America was itself a kind of humongous road picture – all those wagons rolling across the new continent's spectacular vastness. And with our ceaseless love of movement, we became the first people to be transported – in every sense – by the automobile. Small wonder, then, that so many famous Hollywood films, from It Happened One Night to Thelma & Louise, are all about hitting the road.

Yet strangely, what may be the greatest road movie comes not from America but from the tiny, long-settled Italy of 1962. Titled Il sorpasso – a term that refers to the aggressive act of overtaking, or passing, on the highway – Dino Risi's masterful comic drama is an enduringly beloved hit in Italy, and one that's influenced Hollywood pictures as different as Easy Rider and Sideways.”

“Dino Risi’s 1962 classic Il sorpasso brings together two individuals who live by differing tempos and rhythms ­– in short, one moves, the other doesn’t. The driver, Bruno Cortona (Vittorio Gassman), lives at an accelerated tempo, the motoring term being appropriate given he is mostly associated with his car, a Lancia Aurelia sport convertible, an iconic status symbol of the time. Significantly, his is somewhat less than in mint condition, which says much about Bruno’s personality and the shortfall between aspiration and reality. The young man, Roberto Mariani (Jean-Louis Trintignant), is a law student locked away in his apartment studying for his impending exams. His life is fundamentally sedentary, governed by habits and patterns of behaviour he is reluctant to stray from. One is extrovert, impulsive, acts on whims, is open to chance, the other, introverted, shy, pensive and cautious. Two characters, then, and therefore two Italies, for the two characters are not only individuals with their own destinies, but also resonate as allegorical figures for a nation at the crossroads, both literally and metaphorically.

Bruno’s entrance into Roberto’s life represents disturbance and disruption, and from that a growing disquiet about his life, the road taken, and the moral framework that has, to date, governed his actions. Bruno is literally chaos theory in action – a random element that disrupts an existing pattern, fracturing the particles and reconfiguring them into a new pattern. Much like the effect rapid modernisation and hyper-consumerism (or “neo-capitalism”, to use the term of its most ferocious critic Pier Paolo Pasolini) were having on Italy in the era of the so-called “economic miracle”. Therefore the film’s title, Il sorpasso: on the one hand, a colloquial expression indicating the overtaking of one vehicle by another on the road (we see much of that in the film, to often hilarious effect), and on the other, its metaphoric use in reference to the accelerated economic progress made by the Italian nation. Not to be discounted is the possibility that the title also references Roberto’s character, as if his adventure on the road is also an “overcoming” of himself, a leaving behind of a former self – in moving forward, a new becoming. The middle-aged Bruno is and remains what he is from first to last: as one character puts it, “With Bruno, the first impression says it all”.”