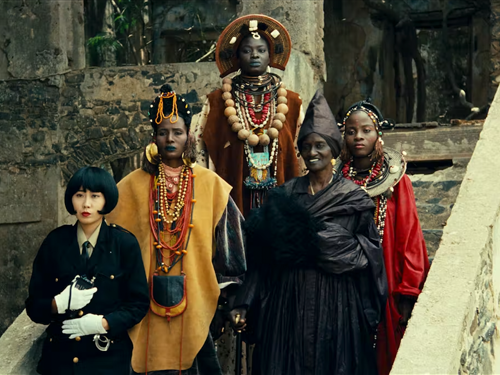 Dramaan is the most popular man in Colobane, but when a woman from his past, now exorbitantly wealthy, returns to the town, things begin to change.

“My goal was to make a continental film, one that crosses boundaries. To make Hyènes even more continental, we borrowed elephants from the Masai of Kenya, hyenas from Uganda, and people from Senegal. And to make it global, we borrowed somebody from Japan, and carnival scenes from the annual Carnival of Humanity of the French Communist Party in Paris. All of these are intended to open the horizons, to make the film universal. The film depicts a human drama. My task was to identify the enemy of humankind: money, the International Monetary Fund, and the World Bank.”

“This film, which evokes the terrible and disastrous revenge of a humiliated woman, is adapted from Friedrich Dürrenmatt’s play, The Visit of the Old Lady. The hyena, a recurring motif in Mambéty’s art, is his favorite animal. Decorating his ring, it symbolizes cowardly and fearful man, who also clings to life as best he can.”

“But even as he used film as a platform for political communication, Mambéty deftly refrained from explicitly didactic art. The moral dilemma that pervades Hyenas is, for instance, accented by a blurring of the lines between victims and oppressors. Secure in her island-citadel, Linguère Ramatou anticipates the onset of “the reign of the hyenas,” confident in her resources (greater than those of “the World Bank”) and in their capacity to eventually sway the townsfolk. In evoking an institution whose policies, like those of the IMF, would come to engulf African nations in pervasive economic turmoil and catastrophic social crises under the guise of financial assistance, Mambéty puts a grim spin on the changes that begin to slowly transfigure the social and spatial realities of Colobane.”

“Durrenmatt’s The Visit was completed in 1956, and the English drama critic Kenneth Tynan wrote in 1960 about the play: The plot by now must be well known; a flamboyant, much-married millionairess returns to the Middle-European town where she was born and offers the inhabitants a free gift of a billion marks if they will consent to murder the man who, many years ago, seduced and jilted her … Eventually, and chillingly, her chosen victim is slaughtered, but I quarrel with those who see the play merely as a satire on greed. It is really a satire on bourgeois democracy. The citizens … vote to decide whether the hero shall live or die, and he agrees to abide by their decision. Swayed by the dangled promise of prosperity, they pronounce him guilty. The verdict is at once monstrously unjust and entirely democratic. When the curtain falls, the question that Herr Dürrenmatt intends to leave in our minds is this: at what point does economic necessity turn democracy into a hoax?”

In the way democracy was captured by Keynesian-era capitalism in The Visit, the egalitarian ethos of communal life is captured by neoliberalism in Hyènes. But the capture of the former is far more devastating than the capture of the latter. Democracy is still a relatively new institution, so one can understand its vulnerability and even forgive it. The mechanism that supports the egalitarian ethos (communal killing), on the other hand, can be argued to be the mechanism by which human morality was spawned and shaped. It is much, much older than democracy, and much more about the animal origins of our humanity.”

“The hyena is an animal of Africa. Singularly wild. It practically almost never kills. First cousin to the vulture. It knows how to sniff out illness in others. And then is capable of following, for a whole season, a sick lion. From a distance. Across the Sahel. To feast one evening on its corpse. Peacefully.” 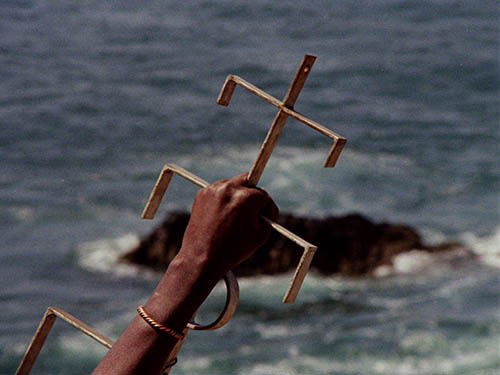 Mory, a charismatic cowherd who drives a motorcycle mounted with a bull-horned skull, and Anta, a female student, meet in Dakar. Alienated and tired of life in Senegal, they dream of going to Paris and come up with different schemes to raise money for the trip.