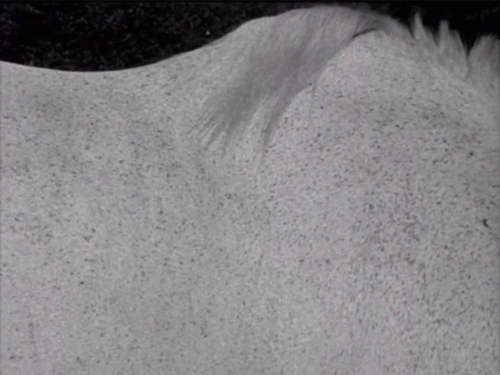 “A few years ago I started collecting images with the idea in mind to pay homage to the slowly vanishing techniques of analog filmmaking. Now a series of these recordings makes Gradual Speed, a work on and for black and white 16mm film seen as matter, and at the same time as a metaphor for everything we cannot grasp. At present, a year later, I notice that these analog techniques might not be disappearing but rather have come to a turning point. As if they are getting a second chance. Due to the actual co-existence of a large variety of moving image media, we are now able to analyze their different characteristics, work with them, and extract from them the unique qualities of analog filmmaking. Most of my work favors celluloid because of its immediate engagement with materiality. Its chemistry allows me to celebrate the temporality of the moment as well as to grasp my own personal moment, that only chance to discover, here and now, a grain of sense.”

“For a film whose title describes the relatively simple mechanism used to create it, Els van Riel's 16mm film ushers a series of startling transfigurations which brilliantly engage the form in the extended time spent with people, animals, events and objects in whose company the filmmaker sketches larger philosophical concerns to do with love, fixity, representation and loss. Carefully positioned, the camera begins on a single frame, the shutter held open, and then is imperceptibly increased in speed, quickening the frame rate and thus changing the exposure time for each successive frame, which eventually produces a visible moving image whose Keystone-Cops styled speed in turn changes, at length falling into step with real time. van Riel was inspired to make the film in part by happening upon the account of Vladimir Shevchenko, one of the first photographers to witness the immediate and appalling consequences of the nuclear disaster at Chernobyl and to record them on a sensitive plate. The actual degree of that sensitivity was evident in the film he used, which, when processed, showed the characteristic effects of heavy radiation in the emulsion. He himself later succumbed to radiation poisoning. van Riel notes, “It is this inextricable relationship that casts its long shadow across this musing film-sculpture, like an afterthought that reminds us that film is primarily a body that carries within it the light traces of other bodies, always balancing between appearing and disappearing” These observations are manifested in the precision of her subject's endlessly renewed temporal adjustment, so that the imminent haste, for example, of her dozing mother, whose fidgeting over the long duration signifies much in it’s change of speed alone, becomes all we have ever needed to know about exposure tables and time's abstract passage. It is this inward epiphany, rather than any dazzle on the screen that holds the greatest power to sway.”