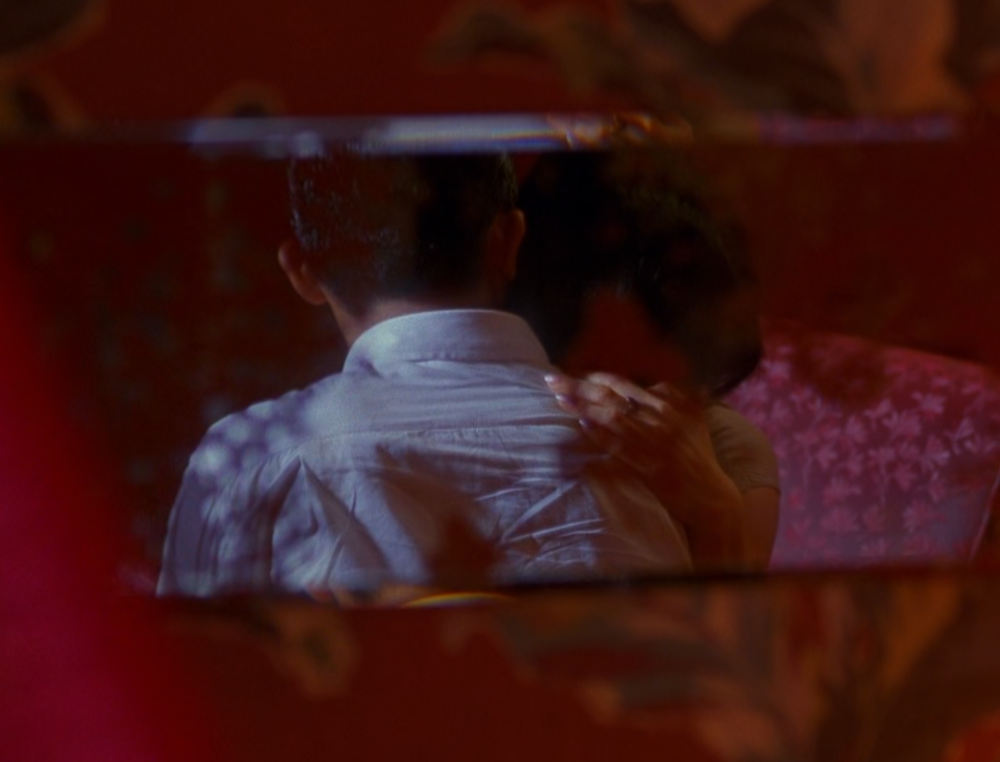 Two neighbors form a strong bond after both suspect extramarital activities of their spouses. However, they agree to keep their bond platonic so as not to commit similar wrongs.

“The figure is the lover at work.”

“Gestures are performed individually, but they are not possessed by individuals. They acquire force and significance through repetition and variation. They are never simply signs – of a singular emotion, or identity, nor an expression of the soul (or to put this less quaintly, of individual subjectivity), but a charting of relations, imagined as well as real, interdiegetic as well as between films and audiences, stars and fans, characters and actors.”

“The philosophical notions of a book of life or game of love allow us to tie together into a meaningful pattern much of what happens in In the Mood for Love, as well as how it is presented: the repetitions on all levels, the incessant mirroring and shifting between characters, the ‘what if’ ritual of make-believe between Mr Chow and Mrs Chan that keeps tripping us up as we try to follow (and invest ourselves in) the romantic plot. There is also another key level – insufficiently grasped or followed through by Wong, in my view – that structures the hierarchy of elements in the film. ‘I'm not like you’, ‘we won't be like them’: the movie is full of these remarks by one or other of the protagonists as they contemplate their unfaithful spouses or their various friends, acquaintances and colleagues. They hold on desperately to their specialness, their difference from ‘ordinary’ folk (signalled in every way: their looks, their bearing, their solemnity, their ‘star status’) – and it is this determination which removes them not only from the sphere of sin and social transgression, but also the possibility of love itself. That is the paradox they are caught in which condemns them to misery and the primal Wong condition: disconnected solitude. Wong’s entire aesthetic form lets us see it another way: these lovers are exactly like everyone else – like each other, like their partners, like the chattering rabble, like every one else before and after them who has ever succumbed and suffered. Everyone feels the way they feel, at all moments. The play on the overheard voices and glimpsed silhouettes of the shadowy spouses confirms this sense – not to mention the droll, Lubitschian device of the gifts, clothes and accessories that (on the plot level) give away the infidelity, while (on a deeper level) stir the increasing indefinition of these screen figures. Unfortunately, Wong apparently had a particularly hard time trying to mark an ending within the flow of this eternal return. To solve the problem he invented – and sticks late in the film – the business of Mr Chow’s secret (and all the other ‘perhaps’ hidden secrets which cascade forth at the end). This device of the secret has the sorry effect of smuggling back in the very illusion of aristocratic specialness that the film seeks, in other ways, to undermine. The secrets held in the bosom by Mr Chow and Mrs Chan separate them once and for all from all those ‘vulgar’ people who merely eat, chatter, go to the whorehouse and seek cheap travel fares. The torment of Wong’s characters here links, unexpectedly, with the classic dilemma of Scorsese’s heroes: to never be like the mass of human others, to smash the reflection in the mirror that reminds one of this inescapable fate. And, in such a frayed context of ‘the humanist subject’ at the edge of recognising its own oblivion, secrets are one of the best ways of reloading the old-fashioned circuit of spectator-character projection – that part of the cinema experience "given over to silence and to a relative aphasia as if it were the ultimate secret of our lives while perhaps really constituting our ultimate subjection’ (Jean-Louis Schefer).”

“Wong Kar-wai’s impossible romances – built, as this one is, on the nuances of substitution and repetition – underscore his sense of how the inevitability and impossibility of change cohabit any given moment. Any gesture that attempts to capture such an impossible configuration cannot but suspend time; and thus we are left to gaze at lovely images of a bygone era that are atemporally arranged, clocked only by Maggie Cheung’s impeccable and spectacularly patterned cheongsam dresses.”