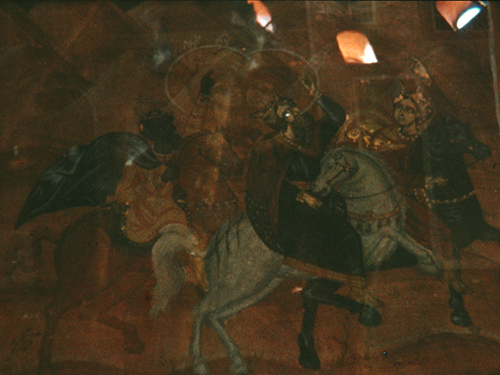 “It is each individual New Cinema Film Spectator who breathes life to the images with and without thought; images which must come to life at the touch of each individual spectator’s eyes. The elements are primitive fire, and the measures of holy light which make films possible.”

“‘I propose a new narrative form through the fusion of the classic montage technique with a more abstract system,’ wrote the filmmaker in 1963, in one of the essays collected in Mark Webber’s invaluable Film as Film: The Collected Writings of Gregory J. Markopoulos (The Visible Press, 2014). ‘This system involves the use of short film phrases which evoke thought-images. Each film phrase is composed of certain select frames that are similar to the harmonic units found in musical composition.’ Markopoulos spent much of his career focused on various methods for editing and interrelating ‘short film phrases’ and individual compositions (of often inanimate objects, emptied rooms, and unpopulated landscapes) in elaborate patterns, and finally on the effects of individual frames as they puncture and punctuate passages of darkness – like flashes in a night sky, or musical notes suddenly piercing silence.”