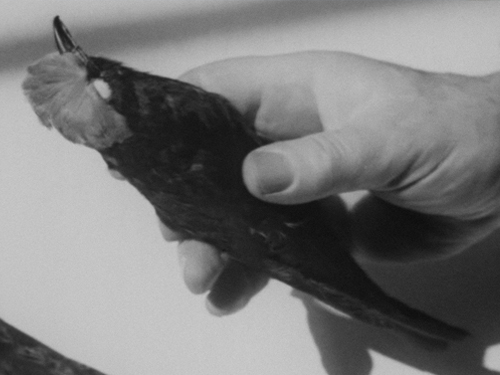 “Aphasia is a film built up in three interwoven chapters. Each part focuses on the absurdity that arises from the collective silence surrounding crimes and the fragmentation of historical events, tracing the line between Belgian colonialism, Austrian antisemitism and the war in Yugoslavia. Focusing on the blind spots of history and the difficulty of speaking about the troubled past, the film charts the line starting with the museum dioramas in Tervuren through photography to film and, like the bullet from the FN Herstal 1910 pistol that became emblematic of the WWI, connects Bosnia, Serbia, Austria and Belgium in their seemingly disparate fates and historical amnesias.”1

“As a medical term, aphasia refers to the inability to speak or to find the right words. Jelena Jureša’s new film installation Aphasia consists of three chapters, each focusing on the collective silence surrounding crime and the compartmentalisation of historical events, and tracing the line between Belgian colonialism, Austrian anti-Semitism and the wars in Yugoslavia.

With Aphasia, Jureša not only digs for the roots and preconditions for a state sponsored violence, but also for the reasons why such collective crimes keep being repeated. The film zooms in on objectivisation and dehumanisation processes, among other themes, while at the same time shedding light on the roles played by photography and film.

The media are not shown as mere silent witnesses to a twisted worldview, but as active instruments in preparing and executing different crimes against humanity. However, Aphasia aims to show their positive force as well. When law and politics fail to bring justice and facilitate collective healing, these same media (photography, film, television) can break the silence, and art may lead the way to justice.”2