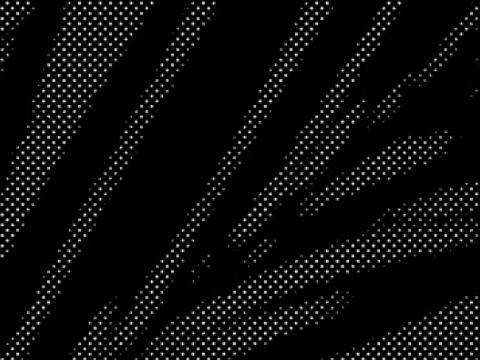 All of us, all of us who come from the world of women in the shadows, are reversing the process: at last it is we who are looking, we who are making a beginning. – Assia Djebar

Exploring a cinematic history as extensive and rich as that of the Arab Mediterranean, one is faced with an exhilarating range of forms and manifestations. From the era of silent film up to the present, the regional cinema cultures of the Maghreb and the Mashriq have produced a myriad of remarkable works. Yet, when poring over the canonical historiographies of cinema, one cannot help but being struck by their relative obscurity, which is even more striking when it comes to films that have been made by women. Although there has been a notable rise of Arab female film directors in recent decades, the work of many pioneers tends to remain painfully neglected.

The Out of the Shadows film programme, originally conceived for the Courtisane festival 2020 in Ghent, was intended to revitalize the work of a diversity of filmmakers whose films remain overlooked and barely screened. Five of these filmmakers are presented in this Dossier: Atteyat Al-Abnoudy, Selma Baccar, Assia Djebar, Jocelyne Saab and Heiny Srour. Coming from different backgrounds and regions, these filmmakers all began to produce films in the 1970s, at a moment of great political and cultural ferment. Often working against the grain, they set out to attend to voices and stories that were at risk of being drowned out by official History. While each of these filmmakers developed their own bold approaches to cinema, their works explore shared themes such as memory and identity, oppression and liberation, violence and exclusion, and the social and political role of women in Arab societies and histories. Each of these filmmakers has been shaped by different traditions and realities, for the Arab woman filmmaker exists no more than the Arab woman. Accordingly, this programme seeks to follow Assia Djebar’s appeal “not to presume ‘to speak for’ or, even worse, to ‘speak on’, barely speak near to, and if possible, to speak right up against”. In this vein, this Dossier brings together a selection of writings and interviews that speak “right up against” the films in the programme. The texts, most of which have been translated for the first time in English, are a testament to the women’s singular practices. They have been brought together here, right up against one another, in the hope of illuminating their rich and inspiring work and widening its reach and appreciation.

This collection of texts and interviews appeared originally as the publication Out of the Shadows – compiled, edited and published by Sabzian and Courtisane, with the support of KASK & Conservatorium and the HOGENT Arts Research Fund. A copy of the original publication can be ordered via Courtisane. 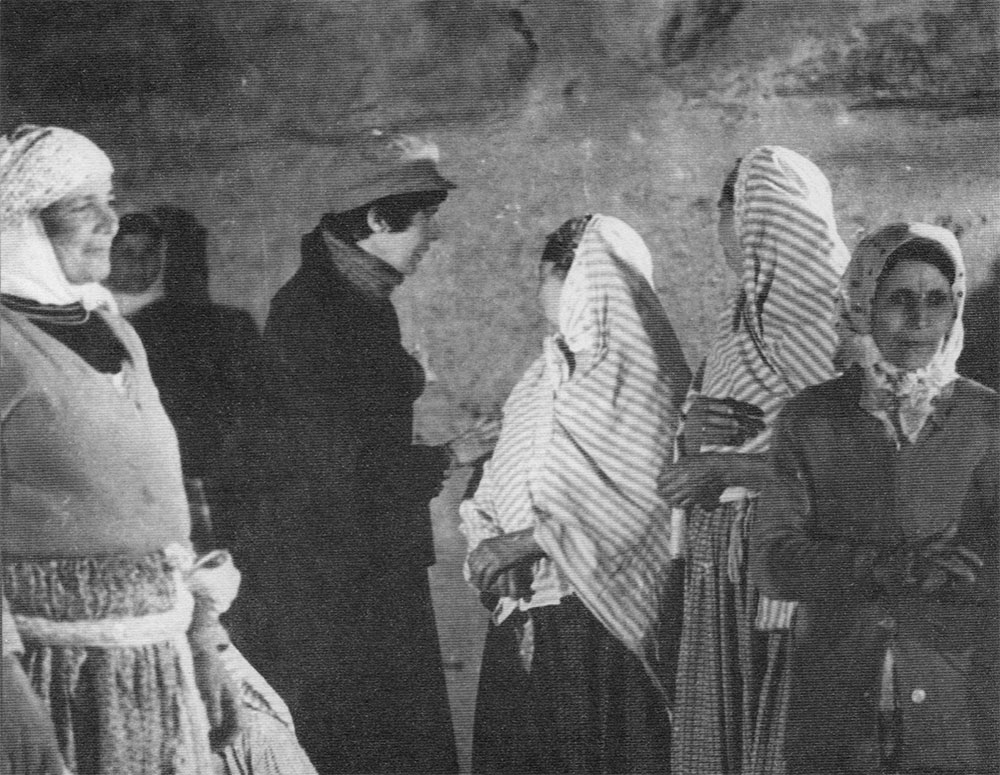 DOSSIER
Out of the Shadows: Assia Djebar
Compiled by

Assia Djebar (1936-2015) was the first Algerian woman to attend the École normale supérieure de jeunes filles outside Paris. Between the ages of twenty and thirty, she wrote four novels. But in the mid-1960s, she decided to abandon writing in French, the language of Algeria’s colonizer. Cinema offered her new ways to approach language as well as the world of the women in her home region. To film The Nouba of the Women of Mount Chenoua in 1975-77, Djebar went back to the mountain of Chenoua in order to listen and give voice to the oral histories as transmitted by otherwise silenced women. In 1980, she resumed her career as a writer with Women of Algiers in Their Apartment, a collection of stories expressing Algeria’s collective memory through polyphonic narratives by female voices. For her final film, The Zerda or the Songs of Oblivion (1978-1982), she spent two years sifting through archival footage shot by French colonizers in the first half of the twentieth century, weaving it into an alternative vision of the history of the Maghreb. As Djebar grew to be one of the most important figures in North African literature, she continued to raise the issue of women’s language and the circulation of women’s voices, all the while developing what she has termed her “own kind of feminism.” 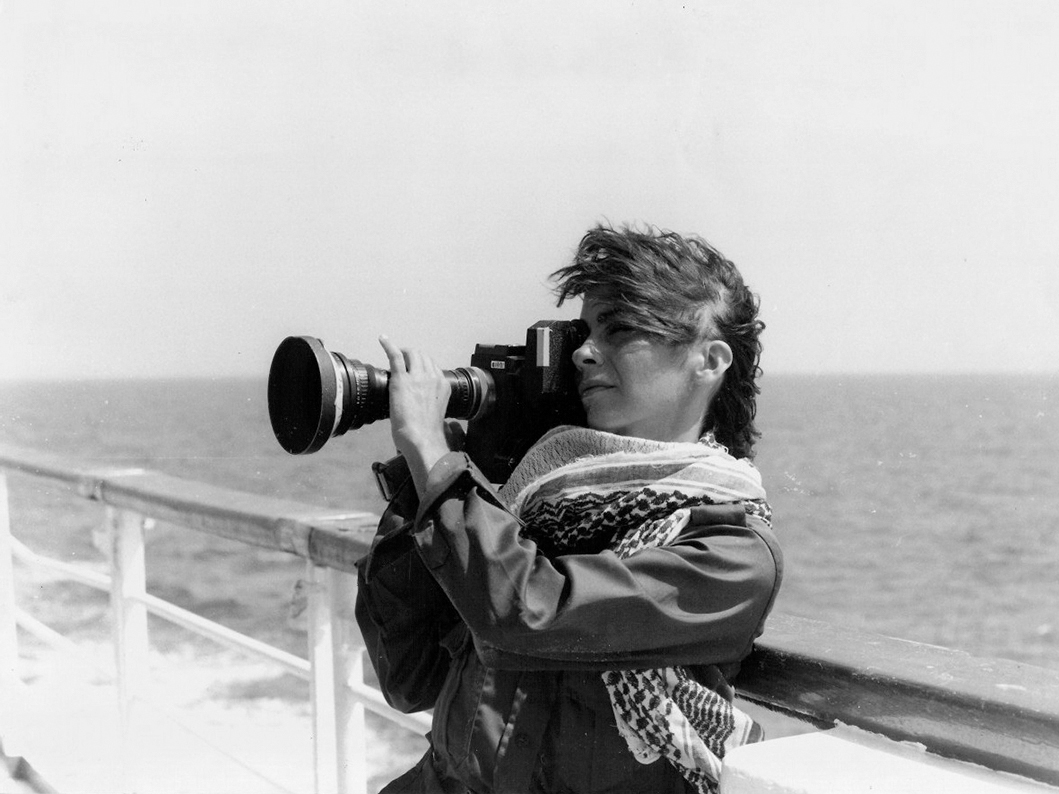 DOSSIER EN
Out of the Shadows: Jocelyne Saab
Compiled by

Jocelyne Saab (1948-2019) was born and raised in Beirut. After completing her studies in economic sciences at the Sorbonne in Paris, Saab was invited by poet and artist Etel Adnan to work as a journalist. War came to Saab’s native Lebanon in 1975, and that same year saw the beginning of Saab’s filmmaking career with Lebanon in a Whirlwind, an account of the various forces and interests behind the incipient conflict. The war would last another 15 years, and Saab’s chronicling of its horrors — particularly in her remarkable “Beirut Trilogy” — is unequalled in both its ethical integrity and emotional impact. In 1985 she directed her first fictional work, A Suspended Life (1985), set in the same war-torn Beirut she had documented ten years prior. After the war reconfigured the whole country, in Once Upon a Time in Beirut (1994), Saab tried to rescue the cinematographic memory of the Lebanese capital in the same year that cinema turned 100 years old. Until her death in January 2019, Jocelyne Saab remained devoted to what she called her “two permanent obsessions: liberty and memory”. 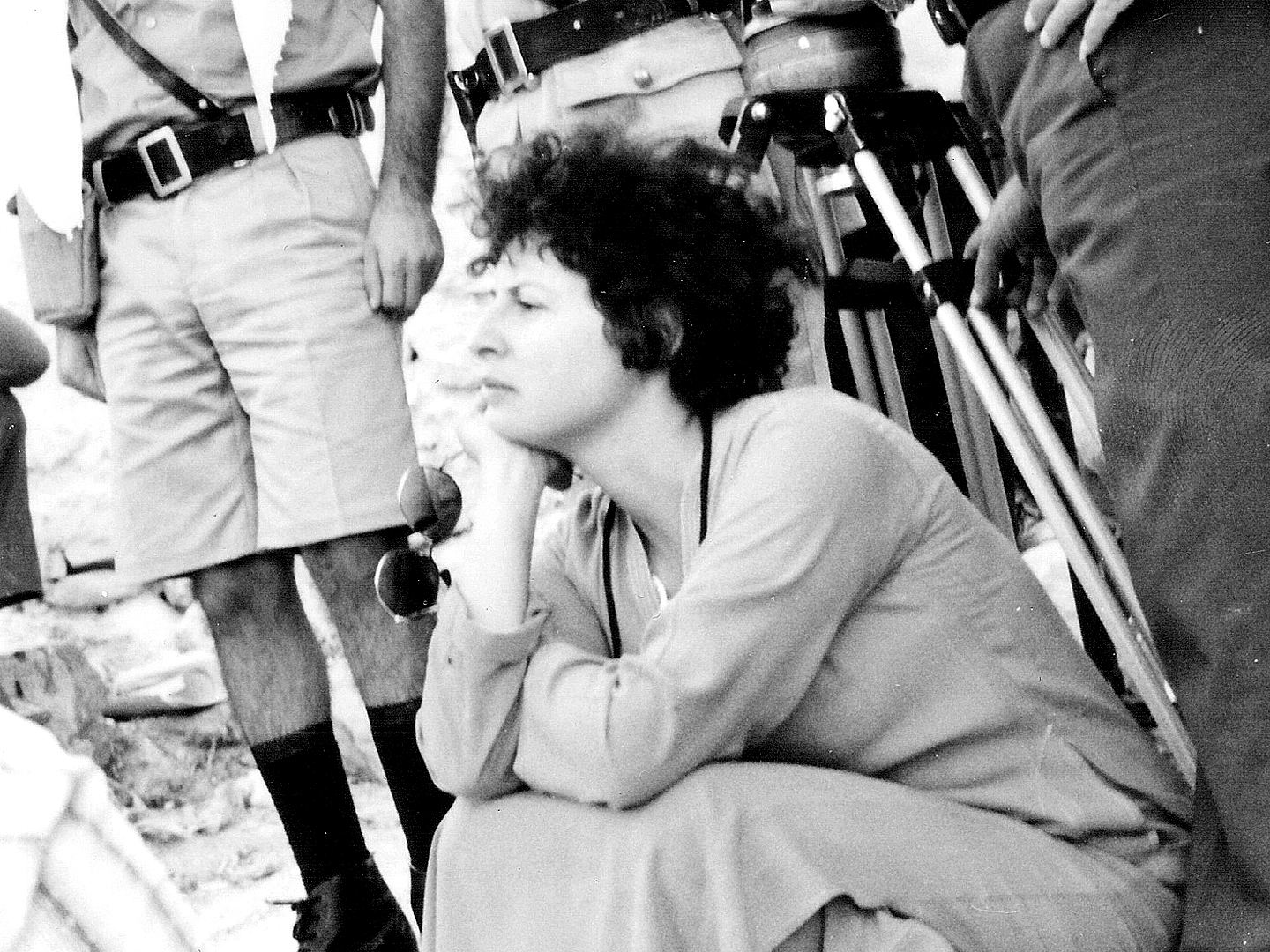 DOSSIER EN
Out of the Shadows: Heiny Srour
Compiled by

Born in 1945 in Beirut, Heiny Srour studied Sociology in Beirut and went on to study Social Anthropology at the Sorbonne in Paris. In 1969, while pursuing a PhD on the status of Lebanese and Arab women and working as a journalist for AfricAsia magazine, she discovered the struggle of the Popular Front for the Liberation of the Occupied Arabian Gulf. Determined to make a film about this feminist movement, she spent two years doing intensive research and finding the necessary funds before setting out to Dhofar. The Hour of Liberation was completed in 1974 and selected at Cannes Film Festival, making Srour the first woman from the Third World to be selected at the prestigious international festival. In her next film, Leila and the Wolves (1984), she unveiled the hidden histories of women in struggle, in particular in Palestine and Lebanon, by weaving an aesthetically and politically ambitious tableau of history, folklore, myth and archival footage. Since initiating a feminist study group in Lebanon in the early 1960s, Srour has been vocal about the position of women, in particular in Arab societies, to this day. 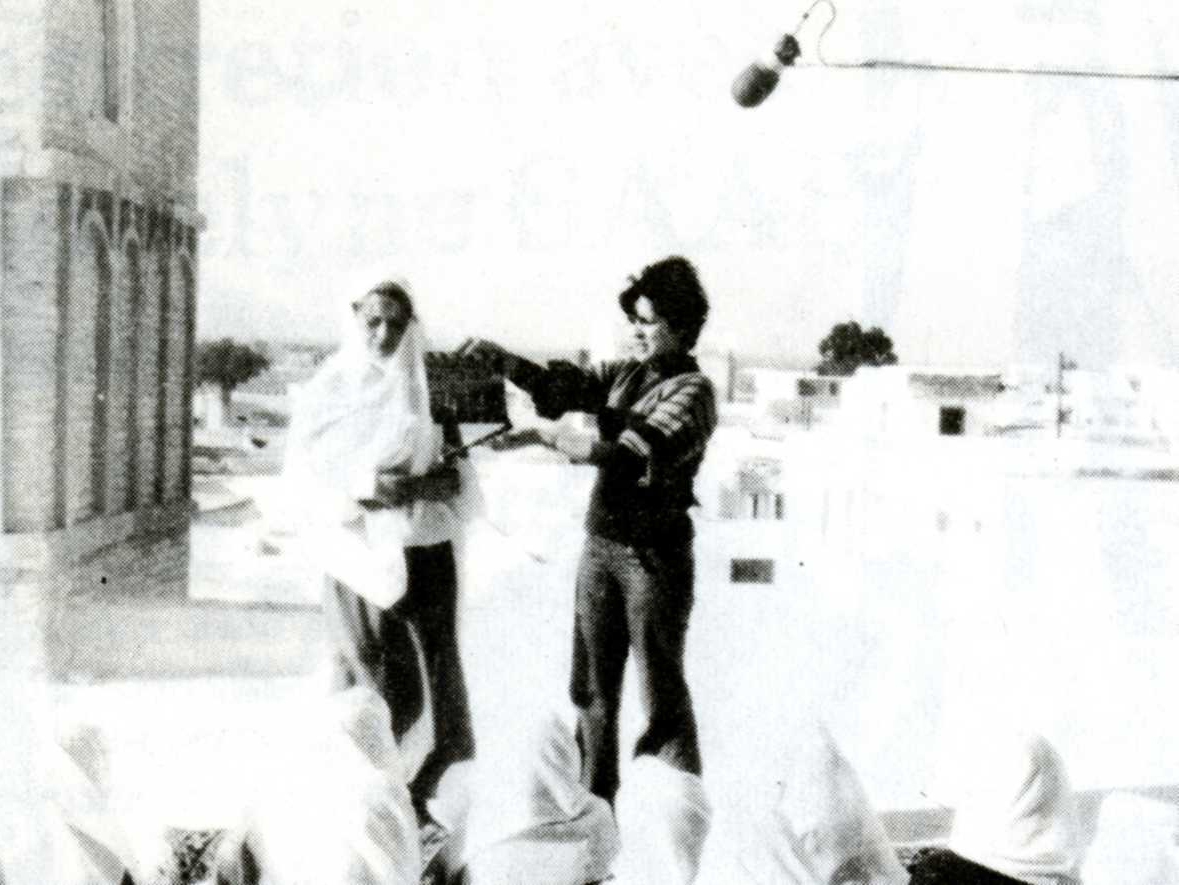 DOSSIER EN
Out of the Shadows: Selma Baccar
Compiled by

Selma Baccar was born in Tunis in 1945. At the age of 21, she began to create films with other women at the Hammam-Lif amateur film club. Her first short film, made in 1966, was a black-and-white film called The Awakening that tackled women’s emancipation in Tunisia. She moved to Paris to study film at the Institut de Formation Cinématographique (IFC), after which she worked as assistant director for Tunisian television. In 1975, Baccar directed her first feature film titled Fatma 75, which is considered to be the first feature film directed by a woman in Tunisia. In this “analytical film”, as Baccar has defined it, three generations of women and three forms of awareness are related — the period between 1930 and 1938 and the creation of the Union of Tunisian Women; the period between 1939 and 1952, which marks the relationship between the national struggle for independence and the women’s struggle; and finally, the period after 1956 to the present, concerning the achievements of Tunisian women with regards to the Code of Personal Status. Baccar’s activism for Tunisian women’s rights led her to an active political career. 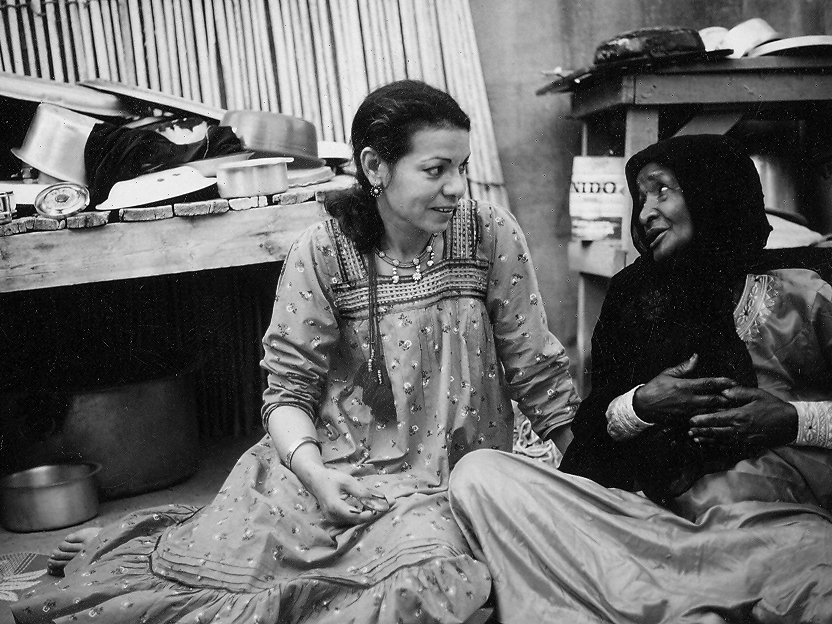 DOSSIER EN
Out of the Shadows: Atteyat Al-Abnoudy
Compiled by

Atteyat Al-Abnoudy (1939-2018) was born into a family of labourers in a small village along the Nile Delta. A child of Nasserism, she studied law at the University of Cairo while supporting herself financially by working as an actress and assistant director at the theatre. At the beginning of the 1970s, she decided to study film at the Cairo Higher Institute of Cinema, where she created Horse of Mud, which was not only her first film but also Egypt’s first documentary produced by a woman. Her graceful focus on the disadvantaged and the unrepresented in Egyptian society would earn her the nickname “the poor people’s filmmaker”, but it also enkindled a confrontation with censorship. Despite its limited circulation, Horse of Mud went on to win numerous international prizes, after which Al-Abnoudy made her graduation film, The Sad Song of Touha, a portrait of Cairo’s street entertainers — which she created in collaboration with her husband, poet and song- writer Abdel Rahman Al-Abnoudy. She continued her studies at the International Film and Television School in London until 1976 and persisted to document the daily lives and struggles of economically and socially marginalized groups in Egypt, while exposing the structural inequalities within the socio-economic system.